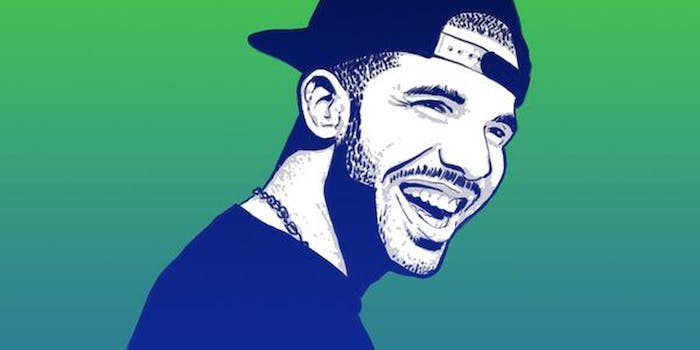 'You used to call me on my cell phone…'

“You used to call me on my cell phone…”

The silence is almost deafening in my office, broken only by the clatter of fingers hitting keys and a stray cough. So I can’t help but feel somewhat responsible for the ban on music that I may have caused by playing “Hotline Bling” every day for a month. Hear me out.

First of all, I really like “Hotline Bling”—I think it’s a really touching song with an even better music video—so a big part of me actually wanted to listen to it every single day (sometimes twice a day) for a month. I didn’t do it out of love, though, nor did I subject my fellow 200-plus employees to Drake’s new single as an experiment. I did it for me. I live in a hazy fantasy world in which I’m never really serious but never quite joking. Repercussions and comeuppance are nothing more than challenges that inspire and fuel a solid chunk of my life.

It began shortly after the release of the “Hotline Bling” music video. I had recently gained access to my open office’s speaker system, a decision the bearer of the precious password of the wireless speakers now calls “a fucking awful decision.” I began playing the song once a day around 11am. Nobody said a thing that first week, even as the trademark “You used to…” filled the office; the only reactions were smiling and silent bobbing to the exceptional Drake jam.

A few days later, I played around with the medium, sometimes playing “Hotline Bling” twice in a row or putting the song on midway through another song. The reactions that followed continued to be on the minor side and mostly consisted of scattered laughs and Slack conversations asking why I was playing the song twice in a row.

I must tip my hat to the people who went along with the joke for as long as they did, letting furious giggle fits ensue after hours of silence were followed by a completely warranted “You used to…” The truth is, nobody really got mad until the end… when they all started getting really, really mad.

It started with one girl walking up to the speakers and physically unplugging them. Next, groans of anger and disbelief saturated the office as “You used to…” crept in from every single corner of the floor. People started asking questions: “Is this you on the music?” “Dude, how many times are you going to play this song?” and “Plz stop.” But I didn’t stop—not yet.

I knew my fun was coming to the end when a guy quit.

I’m almost positive that this particular guy—we’ll call him Craig—didn’t quit because of my music, but he got the impression that the office he thought was professional was actually packed full of Drake-loving heathens like clowns in one of those cars. He would provide the funniest reactions to my hijinks, literally screaming out “fuck! shit!” and storming off into a conference room every single time “You used to…” broke the silence. The crème de la crème came the night I tried to play “Hotline Bling” for the 1,500th time and the speaker’s name on the wireless network mysteriously disappeared.

They told us they were temporarily offline for “updates,” but we all knew the answer. It was because of me, because of “Hotline Bling.” Regardless of the resounding clickity-clack-clickity-clack of fingers hitting keyboard keys that now fill floor five of my building, I don’t regret a thing. Do I want to listen to music? Yes. Do I miss singing along to “You used to…?” Of course! Is a lifetime of quietude worth a dumb joke that happened for the sole purpose of happening?