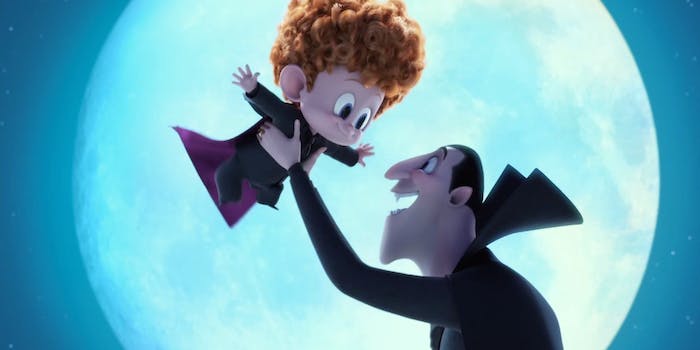 What do you do when you want your half-human, half-vampire grandson to learn to fly? Hotel Transylvania 2‘s Dracula thinks you should throw him off a tower.

Unfortunately for Dracula, flying isn’t something picked up easily by the child as seen in the new teaser trailer for the film. Released Thursday, the trailer shows the Adam Sandler-voiced vampire joined by his old monster friends in the sequel that will see the hotel and its residents face some new challenges. The official synopsis is as follows:

The Drac pack is back for an all-new monster comedy adventure in Sony Pictures Animation’s Hotel Transylvania 2! Everything seems to be changing for the better at Hotel Transylvania… Dracula’s rigid monster-only hotel policy has finally relaxed, opening up its doors to human guests. But behind closed coffins, Drac is worried that his adorable half-human, half-vampire grandson, Dennis, isn’t showing signs of being a vampire.

The film is set to be released Sept. 25.