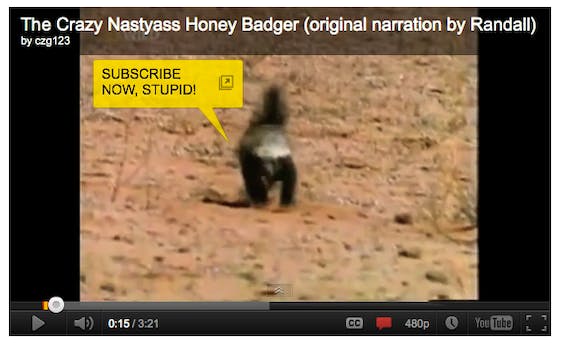 The Canadians, bless their frozen hearts, are putting honey-badger narrator Randall where he belongs: on television.

The honey badger might become a television series, but will he give a shit?

According to the Hollywood Reporter, a Canadian production company is developing a show around Randall, the voice of the sardonic honey badger. The hybrid animation/live-action comedy program will be pitched to broadcast and cable networks this year.

Randall’s viral video, “The Crazy Nastyass Honey Badger,”  features a sassy narrator commentating the lifestyle habits of a honey badger. It has garnered more than 33 million views on YouTube since its posting last year. The viral video has spawned a soon-to-be-released book and two mobile applications.

The show, titled Honey Badger U, will follow an animated Randall as he teaches at a dysfunctional university. Randall’s signature color commentary will be prominent in the series as he teaches an animal-science class while mingling with professors. The school’s mascot is Honey. Would you be shocked if we informed you that said mascot was a honey badger?

Other YouTube hits that have successful landed television-series orders include Epic Meal Time, which will be shooting a pilot for guy-centric G4, and Annoying Orange, which is due to appear on Cartoon Network.