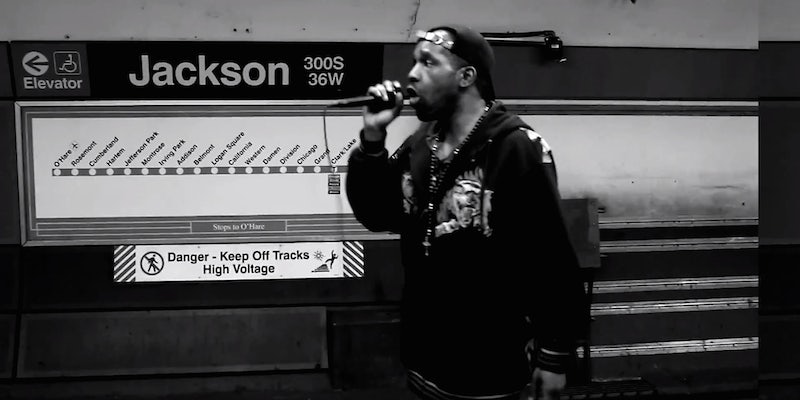 His name is Solow Redline, and he’s been performing at the Jackson Red Line station in Chicago for years.

Remember Ted Williams, the Cleveland homeless man with the golden voice? Well, this guy rapping on a Chicago subway platform may be just as worthy of 15 minutes of fame.

The rapper’s name is Solow Redline, and he’s been performing at the Jackson Red Line station in Chicago for years.

Solow, the self proclaimed “Battle King” from Chicago’s South Side, raps with a down-to-earth style and claims most of his subway performances are freestyles. In an interview with doorsclosingchi, Solow shared why he chooses to perform at Jackson Station of all places:

“More people, and people that actually care to listen. You got people that pass through and actually like music; they’re not like, ‘Oh my God, I just came from work, I don’t want to hear nothing’! These people feel good and they want to hear some more of something else to make them feel good, so I prefer to be here.”

Although he recently threw questionable jabs at popular rappers Young Thug, Chief Keef, and Cam’ron, his outlook on life is positive:

“Somebody gon’ like your boy, man. I don’t care if I don’t get nothing but a feature. For all the people that think I’m homeless, OK, let’s say I’m homeless. But something gon’ happen, and I won’t be homeless long.”

Here’s a video of Solow freestyling about basketball and using words suggested by the crowd gathered at Jackson: