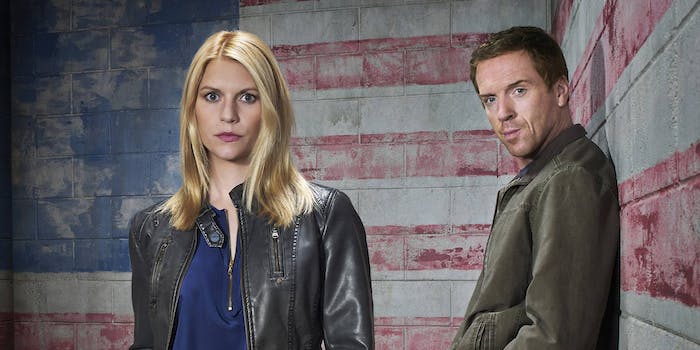 How ‘Homeland’ finally redeemed itself

The Homeland season 3 finale blew itself up, so that out of the rubble it can rebuild.

His and Carrie Mathison’s doomed relationship plotline, along with the twists and turns masterminded by acting CIA director Saul Berenson, have taken the must-watch aspects of the tightly honed first two seasons and turned them into hate-watch rubbernecking from critics and fans alike, with one bombastic reveal after another.

But if executive producers Alex Gansa and Howard Gordon know how to do one thing, it’s how to keep an audience engaged. And Sunday night’s finale may have finally restored Homeland to its former gut-wrenching glory. [Note: Spoilers abound for season 3, as well as Sunday night’s finale.]

To understand the backlash toward the recently wrapped third season, it’s important to remember that the second season of Homeland wasn’t without its fair share of criticism. The Abu Nazir terrorist plotline, which culminated in him not only coming to the United States but controlling Damian Lewis’ twitchy Brody via Skype phone calls (with clarity never seen in real life on a Blackberry), was just one of the story arcs that felt like it moved in a direction that didn’t jibe with the intentionally slow storylines from the first season. But if season 2 took some creative liberties, season 3 chose to throw every manner of plot twist in that it could, stopping just short of renaming the show M. Night Shyamalan Presents: Homeland. Throw in a clunky storyline about Dana Brody doing what she does best—needlessly brooding—and it was a recipe for disaster.

It was right around episode four of the third season, when viewers found out that Carrie’s most recent involuntary psych ward commitment (something we saw once before at the end of season 1—back then it felt shocking and fresh) was actually masterminded by her and Saul in the wake of the Langley bombings, that the call for Gansa and Gordon’s head became loud and pronounced.

Huffington Post’s Maureen Ryan, one of the most vocal critics of the show’s latest season, wrote, “I know that Homeland is unstable and changeable, but I can’t escape the feeling I’m seeing it start to really go off the rails.”

The twists piled on at that point, careening wildly deeper into madness: Saul finds Brody where Carrie hid him deep in Venezuela! Farah finds a trail of $45 million embezzled from Iran! Despite plotting against the United States multiple times, Brody becomes a CIA asset! Bruce Willis is actually a ghost himself! Oh wait, that last one was Shyamalan again. These plot twists are hard to keep up with.

And it was the twists that seemed to almost do the season in—against all odds, everything seemed to keep coming up Carrie, despite the fact that counterterrorism just doesn’t work that way. And for a show that started so grounded in reality with just flashes of shock value, so poetically placed, they actually did mirror the poor choices we make in our everyday lives. It’s hard for a loyal viewer to suddenly accept the tonal shift. As Vulture’s Matt Zoller Seitz said in his finale recap, “If Homeland had more of a sense of humor about its ridiculousness, we might have accepted such events as examples of nightmare logic rather than trying to poke holes in their plausibility.”

Yet the events of the finale—namely, the fact that none of our major players got the major victories they’d been striving for, despite a season of implausible victories along the way—may be what brings Homeland back to some of its former grace. Brody dies. After inexplicably avoiding death and incarceration for multiple seasons, despite literally being in the clutches of both the CIA and the Iranian government, it had become a foregone conclusion that the tortured ex-Marine would find a way to slip out of trouble yet again. But he doesn’t. He dies, in a manner befitting a war criminal, strung up in a public square for all to judge him for his perceived sins.

Saul doesn’t become director of the CIA. Sen. Lockhart, designed specifically to be hated, prevails. Despite being hallowed as “The Maestro,” Saul receives nothing for his work other than being warned to not let the door hit him on the way out. For a man who received two huge victories in the closing moments of episodes 10 and 11 when he was convinced he had failed—finding that Brody infiltrated the Iranian border, and then had murdered the head of the Iranian Revolutionary Guard—it was almost expected that the closing moments of episode 12 would give Saul some sort of victory over Sen. Lockhart. But it didn’t. Even in his return to Washington, D.C., we see little conversation among fellow coworkers and Saul. He is a specter where he once used to be a bear.

As for Carrie, even though she earned the title of youngest ever station chief (as Saul suggested she might at the close of the second season), did she really get what she wanted? As she talked to her sister about giving up her and Brody’s baby, she cried out what she really felt: “I’m scared. And I’m sad.”

And thus comes the redemption of Homeland. Argue all you want about whether the choices made this season were creative liberties taken by the mercy of earned victories in seasons past or grave errors in storytelling that alienated a loyal fanbase, but the finale finally melted the waxen wings of a season that flew too close to the sun. And by doing so, it grounded the show back in reality, because it would be too trite (and at this point, almost too expected) for everything to work out in favor of any of our flawed protagonists.

The comeuppance was necessary: Brody’s needs no rationalization, nor does Carrie’s. Saul’s bears some analysis: For someone so beloved and smart to fall flat on his face makes no sense, but as brilliant as Saul was this season, he was also ruthless. We saw hints of this in season 1, when he wearily chose his career over his marriage, but for a man willing to sacrifice his protege for a harebrained shot at an asset, no parades can be commissioned just yet.

Bringing everyone back to square one was the reboot both the characters and the fans needed, to allow us to believe that Homeland might one day be just as good as it was before.