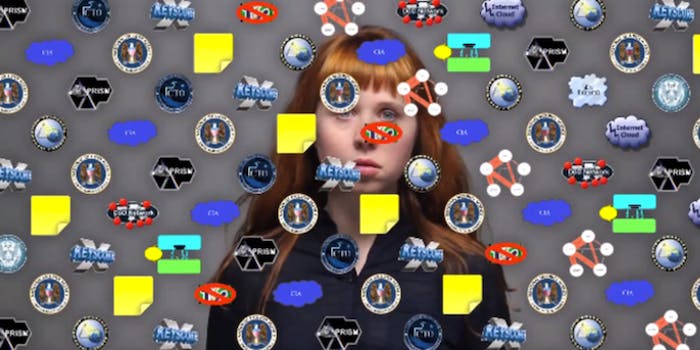 Indie artist pens ‘break up’ song for the NSA

"Is everything done privately on my laptop to be considered a public performance?"

As the National Security Agency has crept further into pop culture, musicians and artists have found ways to interpret their feelings about privacy and surveillance in tandem with public performance. Musician Holly Herndon attempts to channel those feelings in her new NSA breakup anthem, “Home.”

The choppy, vocally manipulated electronic song falls in sync with the colorful visuals, created by Amsterdam-based design studio Metahaven. The refrain: “I know that you know me better than I know me.” Herndon provided the following statement about the song:

For my debut album Movement, I communicated an intimacy with my laptop. It is my instrument, memory, and window to most people that I love. It is my Home.

The ongoing NSA revelations have fundamentally changed this relationship. I entrusted so much in my device. To learn this intimacy had been compromised felt like a grand betrayal. Is everything done privately on my laptop to be considered a public performance?

In “Home”, I address that invisible audience. It is a love song for prying eyes (an agent/a critic), and also a break up song with the devices with which I shared a naive relationship. There is something dramatic, teenage and vulnerable to this sensation—our relationships with these interconnected devices are still so young, so naive.

As a culture, we are in a process of accelerated, and reluctant, maturation. We are attempting to reconcile the great emotional power of these technologies knowing that the more we welcome them into our lives, the more power they have to destabilize and hurt us.

Metahaven explained it wanted to explore the “aesthetics” of NSA surveillance: “Code names, acronyms, icons, and graphics from a shadow world designed to never be publicly exposed.” In the video, emoji-like PRISM and Homeland Security logos rain down on Herndon as she sings in full view of the camera, and obscured by it.