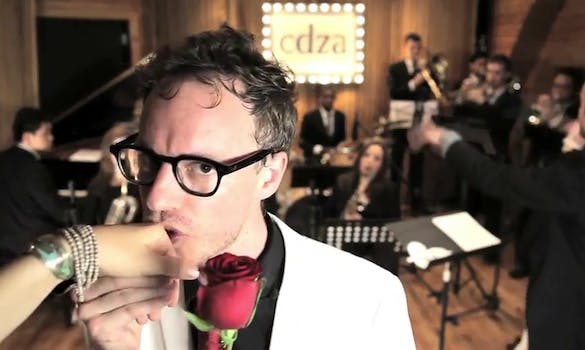 The “History of Wooing Women” in under 4 minutes

This four-minute medley offers a timeline of love songs that starts in 1955 and ends in 2010, to hilarious effect.

Is popular music losing its romantic edge? Or are we just getting more creative about saying “I love you”?

Collective Cadenza, who have famously performed a medley of Ace of Base songs on basses and produced quite a few other equally charmingly viral videos, seem to think so. Their latest, “The History of Wooing,” is a timeline of love songs that starts in 1955 and ends in 2010. Since being uploaded July 23, the medley has clocked nearly 40,000 views.

“Men just don’t romance ladies the way they used to…” the tagline reads.

It doesn’t take long for Collective Cadenza’s latest video experiment to delve into explicative bleeps. At 1994, to be exact—when Boyz II Men’s “I’ll Make Love To You” segues into Nine Inch Nails “Closer.”

Modern times definitely do call for more, er, ‘modern’ love-declaring techniques, but there have certainly been quite a few love songs (on the charts, no less!) that have forgone the foul language Collective Cadenza points out. How about Faith Hill’s “Breathe” from 2000 or Alicia Keys’ 2001 hit “Fallin’”? 2003 had Beyoncé and Jay-Z’s “Crazy in Love” and 2004 was the year of Maroon 5’s “This Love.” I could go on.

And that’s not to say I don’t find the Ying Yang Twins incredible romantic. Because I do.