You’ll never guess which rapper has the largest vocabulary

Now you can see how Eminem, the Wu-Tang Clan, and Kanye West stack up against Shakespeare.

Many have mused on the relationship between Shakespeare and hip-hop.

“If you look at real hip-hop, your KRS-Ones, your Chuck Ds, it’s poetry, it’s social commentary, it’s documenting history,” argued rapper Akala in 2009. “And in three or 400 years, people will probably look upon it as such. There were those who frowned upon Shakespeare’s work in his time, but it was a reflection of reality.”

Now thanks to Matt Daniels, a data scientist from New York City, there’s a much easier way to draw that comparison.

Shakespeare used a total of 28,829 unique words in his work, leading some to believe he had one of the largest vocabularies ever. Looking at the first 5,000 words of seven classic works, Daniels used a technique called token analysis to determine that the Bard used 5,170 unique words in that span.

That’s the benchmark Daniels measured rappers against, based on data provided by Rap Genius. Daniels similarly limited his research to an artist’s first 35,000 lyrics—roughly three to five studio albums (EPs and mixtapes included)—to have an even measuring stick for both veteran and emerging rappers. (Unfortunately, that means artists like Kendrick Lamar and the late Ol’ Dirty Bastard didn’t have enough material to be included.)

So how does your favorite stack up? For more interactive elements, skip straight to Daniels’ original piece, but in general, indie rapper Aesop Rock—included by Reddit’s popular demand—came out ahead of even Shakespeare, with 7,392 unique words used. 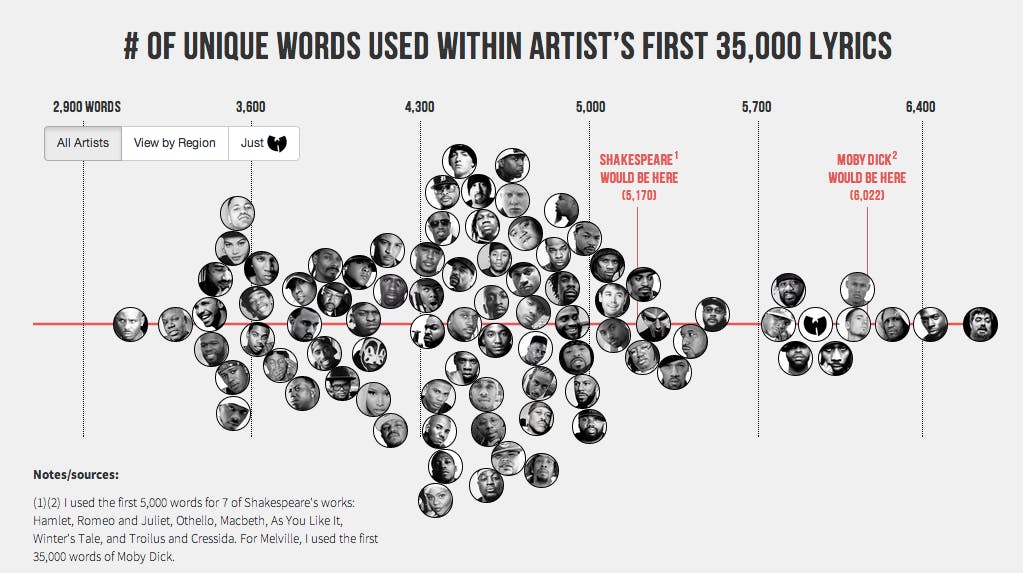 Breaking the findings down by region, the East Coast had the highest average by far (4,804).

Surprisingly, Kanye West, 2Pac, Lil Wayne, and Snoop Dogg—four of the biggest names in rap history—fell in the bottom 20 percent.

You’ll want to spend a couple of days in this data. When you’re finished, be sure to check out Daniels’ previous works on the etymology of “Shorty” and Outkast.