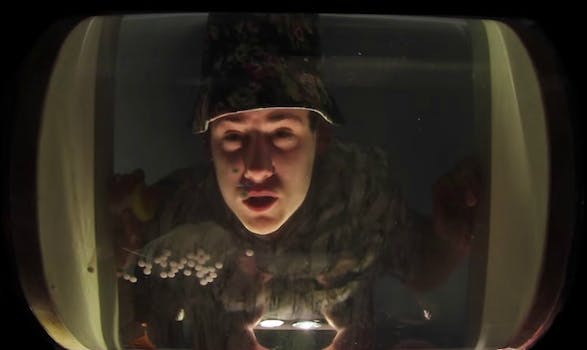 He must have one hell of a set of lungs.

How long could you hold your breath underwater? Maybe a full minute, right? Maybe 90 seconds? Probably not two minutes, though.

What if you were also lip-syncing a music video while you moved your head around in a water-filled tank, spilling pills and putting on wristwatches while trying to remember the lyrics to your song and trying NOT  to kill yourself?

That’s the bizarre story behind the latest music video from Kojaque, a self-described hip-hop artist and producer who nearly got himself killed making the video for his song “Midnight Flower.”

Kojaque kept his cool for most of the video, but he appeared to be in distress for the last 50 seconds or so. According to the redditor who posted the video, that’s because Kojaque passed out.

“He survived to tell the tale though, few brain cells lost but otherwise all good,” wrote the redditor, Thabisa.

All’s well that ends well, even if a few brain cells have to sacrificed. But remember, as Kojaque wrote on YouTube: Safety first!

“Don’t try to do this at home,” he wrote in the video description. “I had people on standby with me, it’s is [sic] by no means safe.”

Take it from Kojaque: Sticking your head underwater for three minutes while lip-syncing your song is not necessarily the best idea.