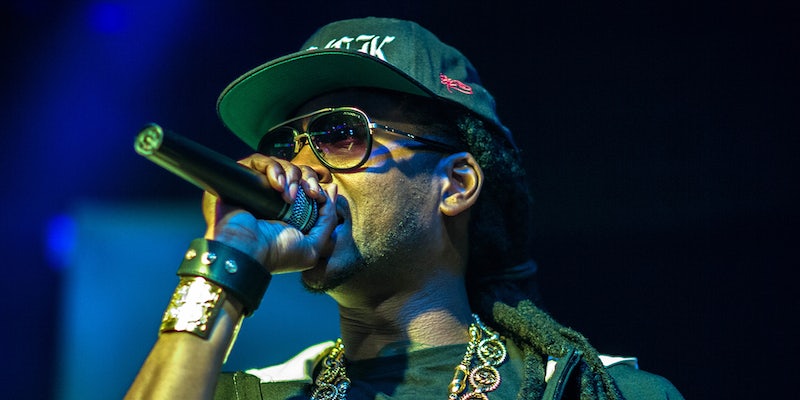 It’s a six-minute middle finger to Fox News’ America and is veritably moving in scope,

Rapper The Game responded to the Ferguson, Mo., headlines by assembling an all-star team of top-shelf rappers for protest song “Ferguson Anthem.” Game premiered the track Wednesday via Instagram.

“I am a black man with kids of my own that I love more than anything, and I cannot fathom a horrific tragedy like Michael Brown’s happening to them. … That is why this song must be made and why it was so easy for so many of my friends to come together and unite against the injustice.”

The united front plays out with exasperated performances about young black men and the police—speaking personally and tangentially about Michael Brown. It’s cool to see drum majors like Diddy just kinda show up and rap some honest (almost surely ghostwritten) material, then cede the floor.

The song is worth breaking down a little bit because the chorus—performed by vocalist King Pharoah, Tyrese, Ginuwine, and Tank—is lasting and forceful: “God didn’t put us on the Earth to get murdered.” And each rapper leaves a mark with one or two interesting lines.

“As we keep our heads up high and scream for justice. Rest in peace, Mike Brown.” —DJ Khaled on the familiarly snarling DJ voiceover intro.

“They left that boy four hours in the cold out there.” —Game, on his curatorial intro verse

“Hands in the sky still was left in the road / ribbon in the sky Michael Brown another soul.” —Rick Ross, the velvet-voiced wonder

“There’s a lot of rotten eggs in the crow’s nest … Turn on the news and seen a tank rollin’ down the street” —2 Chainz, pointing out how bad it is out there

“Shot down with his hands up—that’s what occurred? Man, that sounds absurd. Matter fact to me that sound like murder” —Fabolous, really stretching out the word “murder” so that it sounds like “absurd”

“I had a crib out there. I used to live out there. So I know how niggas feel out there.”  —Yo Gotti, tapping into the groupthink

“I’m sure the general population trying to be more active, but when the light finally catches you you Ice Challenge.” —Wale, venting disdain for insular, armchair, social-media-based activism

“I heard he surrendered, but we all saw how they did him.” —An always acutely sharp, observationally brilliant Curren$y, who goes on to preemptively vent about the Brown family’s imminent legal process

“Who cares who ain’t on our side because we on our own / How you preach peace to a family that just lost they own?” —Problem, making a splash at the end and raising the most pulses with his militant, aggro, call to arms part.

“Ferguson Anthem” can be purchased on iTunes, with proceeds going to the Justice For Mike Brown GoFundMe account.