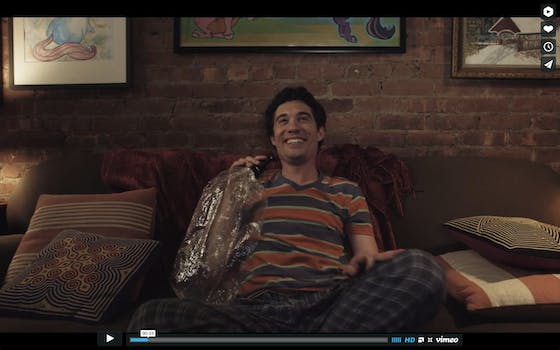 ‘High Maintenance’ is back—behind a paywall

Sometimes, when you suddenly start getting paid for doing what you love and are good at, unexpected pressures can take root.

There is no doubt that High Maintenance is the high-water mark of the webseries genre; its crisp, fragmented narratives, uniting to narrate an intimate and usually humorous depiction of “normal” New Yorkers is the exact thing that thousands shoot for but miss. As a representation of ordinary people, it is remarkable, and surely no one can begrudge the creators for placing their three new episodes behind a paywall. But sometimes, when you suddenly start getting paid for doing what you love and are good at, unexpected pressures can take root.

Not pressures from their partner, Vimeo—which has invested in these episodes plus three more in the new year as part of its implementation of a Netflix-style production model—mind you. No, creative control remains with creators Ben Sinclair and Katja Blichfeld. But you get the feeling, as you watch the three new episodes, “Geiger,” “Genghis,” and “Ruth,” that during the creative process, there was a certain attempt made to placate those who will be—in my opinion, wrongly—disgusted with having to pay a couple of dollars an episode (or eight for the whole cycle of six) for something that previously they got for free.

It’s initially apparent in episode lengths. While the first 13 episodes of High Maintenance clocked in between five and 14 minutes, the new episodes are, respectively, 13, 16, and 19. Whether consciously or not, this is a misguided movement to present value to a now-paying viewer, as if a gallon of truffle oil is inherently more valuable than a few slivers of trifola d’Alba. The series worked precisely because we glimpsed its disparate characters in fragments. Half the fun was drawing these snippets of their life together ourselves.

But here, it is done for us. While there remains some of its beautifully subtle exposition—one character, apropos of nothing, mentions that he misses “being able to run through red lights whenever I want”—the scenes here are now too long, too wordy and consequently, too revealing. Gone is the intrigue created by truncated glimpses into others’ lives, replaced now by illustrated, normal, sort of boring people.

In “Genghis,” we again encounter the asexual magician from past episodes “Dinah” and “Elijah,” only this time he’s just insipid Evan Waxman, struggling with his life choices in a hackneyed Dangerous Minds teaching scenario. The woman with cancer from “Brad Pitts” is again central in “Ruth,” but instead of trying to come to terms with her illness, she is now in remission and more interested in the mundane process of finding a man.

Some may enjoy this extra character development; for now it feels like a more conventional show, the recurrence of characters now giving it an episodic sheen the earlier episodes—which played almost like short films, held together by a single thread—lacked. But it seems a shame to move away from the liberated attributes that made it great and toward a framework that resembles television. I’d always admired, for example, the restraint of High Maintenance of rarely actually showing people high. It’s lazy writing and breaks a rigid performers code that they should never be having more fun than their audience. Yet in “Ruth,” the longest of the new episodes, the predictable narrative for a show that features a pot dealer is allowed to occur, and it dominates the episode.

It would be wrong, however, to dismiss High Maintenance just because of this shift in direction. The writing is still—if now slightly flabbier as it tries to fill the show’s extra space—genuine and playful, and some of the ideas in “Geiger,” especially, are thrilling. It still looks, as something shot in New York should, incredible. And heaven knows that it has certainly generated enough goodwill to persist with. But there is also no doubt that we are fully within our remit to be critical, because now, after all, we are a paying audience.