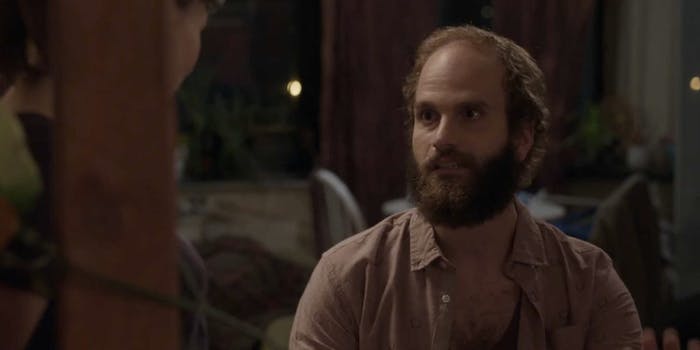 Am I that stoned, or is this show simply perfect?

The time for rejoicing is now: Three new episodes of High Maintenance, widely known as the best webseries of all time, dropped on Vimeo today. And they are, in a word, blunt.

If you’re just now hearing about this show—and make no mistake, you have led a shadow of a life till right this moment if so—you may be surprised to see that each episode after the first 13 costs $1.99 (you can also rent the whole series for a year for $7.99). Something funny on the Internet costs money? Believe it, and believe me when I say it’s worth every stinking penny.

The brilliance of High Maintenance, of course, lies in being a “stoner” comedy about almost anything other than weed: Our only continued thread is that of The Guy, a bike-borne pot deliveryman who services a dizzying cross-section of New York weirdos—and even he is sometimes more of a grace note than a lead character. The first installment of this latest episode batch, “Sufjan,” tracks the disappointment of a money-strapped couple that moves to Brooklyn’s Ditmas Park and discovers that it doesn’t match their vision of outer-borough paradise (and that Sufjan Stevens doesn’t live there anymore). It’s comfortably situated in the series wheelhouse: a blindingly realistic romance infected by the melancholy of circumstance, with an oddball B-plot that involves diabetic shock and an intimidating ice cream truck driver.

Things shift into higher gear with “Esme,” which plumbs the wreckage of a young woman who happens to work for one of The Guy’s competitors, a women’s marijuana collective called “Cannibitches.” What’s remarkable about this narrative is the way in which it takes an objectively insufferable person—delusional, narcissistic, untalented, and utterly lacking in social graces—and insists on finding an emotional core that’s worthy of our empathy. The performance from Tracee Chimo, whom you may recognize from Orange Is the New Black, is a standout, at once painfully familiar and completely over the top, not to mention vulnerable. It’s a good thing we have a side story about the absurdity of religion to lighten the mood.

The crown jewel of the latest “season,” however, has got to be the finale. The nearly 20-minute “Sabrina” could probably be tightened up a bit, but its unhurried sprawl through a group of friends’ ill-starred weekend retreat in the country is part of what sings it to life. We get a lot more of the preternaturally chill Guy—a relative newcomer to this gang of stymied artists—than usual, and Ben Sinclair works wonders with the screen time. (He and his wife, Katja Blichfeld, also created and write the series.) Aside from featuring some inspired predicaments, like the realization that the supposedly absent owners of the canoes you borrowed for a lazy drift on a river while shrooming are in fact shouting angrily from the shore, there’s a bracing throughline on the subjects of ambition and betrayal, plus a perfect running gag that concerns an overdeployed impression of Michael J. Fox in Back to the Future.

All in all, it’s more stellar work from a team that’s been at the top of its craft for years. But don’t take my word for it—go and see for yourself. And don’t be surprised to find yourself feeling what all the glitzy Oscar-bait in the world can’t touch: your very own tender soul.