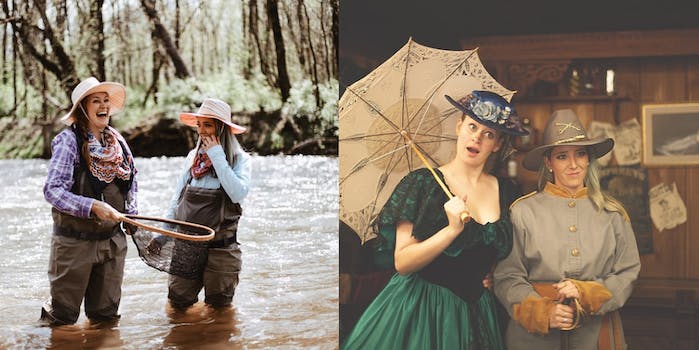 YouTubers are often known for broadcasting their lives from inside their own bedrooms, so a travel show like #HeyUSA, helmed by YouTube star Mamrie Hart, pushes the boundaries and the comfort zone of today’s biggest digital celebrities.

Last season Hart criss-crossed the United States with fellow YouTuber Grace Helbig, however, with a second season on the table, Helbig booked her own late night talk show for E! that kept her rooted in California. Helbig and Hart had to get creative to keep the show going.

“We came up with the concept that I meet other YouTubers out on the road, and Grace acts as the puppet master telling us where to go and what to do,” explained Hart.

So far, she’s been sent to Hawaii with Kingsley and Las Vegas with Tyler Oakley, so in her role as svengali, Helbig has been kind. Mostly.

In an upcoming episode, Hart takes on Tennessee with Jenna Marbles, the most-subscribed female YouTuber in the business.

“I love cheesy Americana,” said Hart. “That is my jam. [Grace] hasn’t really screwed us over. I’ve had to do a couple activities that were like, ‘what the hell?’ In Gatlinburg, [Tenn.], we went to a lumberjack dinner show. We had to learn how to do the tree climbing, and it’s a very unflattering angle.”

Of bonding with Marbles, Hart said: “We’d only hung out a couple times, and that was at her house or at a convention,” Hart said. “We’d never had that much one-on-one time. We get along fantastic; she’s super sweet, and we just talk about our dogs 90 percent of the time.”

While she’s gotten to do some amazing things, like learn to drive a back-hoe in an adult construction machine playground, she’s also enjoyed the chance to connect with fellow YouTubers whom she doesn’t see often.

“It’s such a new dynamic, and some of these co-hosts and I are getting to know each other on the road,” she said. “Some of them have never done a hosting gig before, so they’re learning their style. There’s no place to become better friends than somewhere completely random.”

As Helbig continues to pull the strings from afar, Hart’s hopeful that if there’s another season, they might have to “think of some different titles” so they can go beyond the United States.

“I’d like to take it out of the U.S.,” she said. “I’ve got my passport ready to rock, and I’ve got my name cleared of all charges.”

Her dream overseas destination would be Europe, since it has the most variety. Until they can hop the pond, #HeyUSA is staying stateside, and Hart, known for her boozy antics, says she’s thematically drinking her way through her travels.

“Jenna and I went hard on the moonshine,” laughed Hart. “We went hard on the straight up moonshine they can now sell, but we also—spoiler alert—drank moonshine from a flask from a man’s pocket while we were fishing. The real stuff. To quote him, ‘You can feel it drip off your brain.’ We took a sip and he said, ‘now don’t smoke a cigarette, you can breathe fire.’”