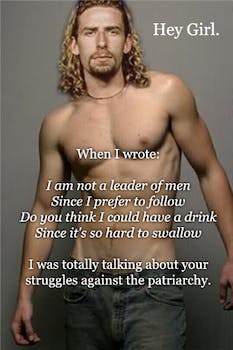 Hey girl, Chad Kroeger is the new Ryan Gosling or something

We can't explain why Chad Kroeger is spouting feminist theory on Tumblr. We're just going to roll with it, okay?

There’s now at least one reason not to install Nickelblock, the Web plugin that removes any mention of Nickelback from your browser: Feminist Chad Kroeger.

The Tumblr account pairs lyrics by Kroeger, the Detroit Lions’ least favorite singer, with quasi-feminist explanations. As noted by the anonymous author: “Hey Girl, Look at this photograph, and think about how it questions the trauma and trans-generation memory in the works of women artists.”

While hatched mere hours ago, the single-purpose Tumblr has already posted five entries, been tipped to the Daily Swarm, and received more than 200 notes.

Much like Hey Girl It’s KStew, written by the YoungCreature, Feminist Chad Kroeger is some sort of  genetic mutation of the Ryan Gosling Tumblr phenomenon—and it’s airborne.

Judging from Gosblr, the Daily Dot’s regularly updated database of Ryan Gosling-inspired Tumblr accounts, this is only the beginning.