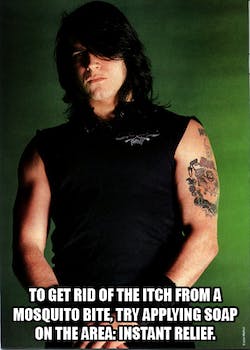 Vegan Black Metal Chef has nothing on Helpful Kitchen Danzig.

The dark prince of punk rock continues to fall from grace online—all the way to the kitchen.

First Glenn Danzig became an unintentional spokesman for Fresh Step after being photographed in a Misfits t-shirt while purchasing groceries and cat litter—a moment that led to a hilarious mashup video.

Then came Danzig’s infamous tantrum at Fun Fun Fun Fest in Austin, Texas, in November, where his late arrival and backstage demands for “French onion soup” and space heaters sparked vitriolic comments across various Web forums, not to mention a parody set from Ted Leo & the Pharmacists.

Created on Dec. 29, the regularly updated single-subject Tumblr pairs Martha Stewart-esque household tips with a classic photo from Danzig’s post-Misfits prime. In just under a week, the blog has garnered more than a hundred followers.

Some of the remarks are appropriately gothic (“Putting salty bacon on a boil is said to draw the poison out”), but most aren’t. Here’s a small sampler:

Here’s one more helpful tip for Danzig: Revenge is a dish a best served cold.