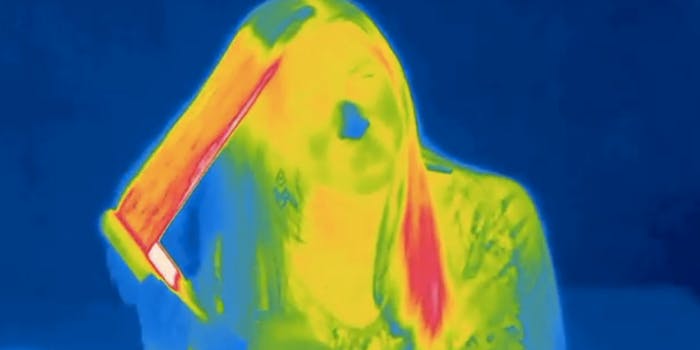 Watch the heat signatures from everyday activities like hairstyles, laptops, and eating

Watch the heat signatures from everyday activities like using laptops and making out.

Ever wonder just how hot you get when making out? BuzzFeed got to play around with the Flir Thermal Camera, which films infrared signatures, to document the different temperatures of everyday activities.

The camera has created some interesting video content before. A YouTuber showed how a thief armed with the camera could trace your ATM pin code by heat signatures left by your fingers. The technology has also been used to show just how hot a racecar’s tires get during a run. BuzzFeed’s video errs more on the fun, racecar side, showing all sorts of different heat signatures for a variety of actions.

The video documents how hot your lap gets from your laptop, what happens to your hair as you flat iron it, and It even goes into NSFW territory with what the male anatomy looks like during arousal. While these temperature changes are all common sense, it’s still fun to see just how hot you’re getting during different activities, from G to NC-17.