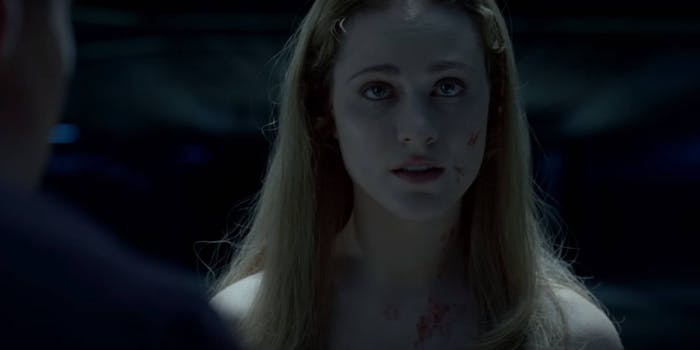 HBO’s Westworld may well be the next Game of Thrones.

Judging by its first proper trailer, Westworld also shares one of the most heavily criticized features HBO’s most popular show: a passion for sexualized violence.

Taking place in a Wild West theme park populated by humanoid robots, Westworld, which is based on Michael Crichton’s 1973 sci-fi/Western movie, is a thriller about artificial intelligence, spiced up by its faux-Western setting. It’s also got impressively high production values, with a budget of $54 million for its first 10-episode season

With Anthony Hopkins starring as the theme park’s director, and actors like Evan Rachel Wood and James Marsden playing some of the androids, Westworld is clearly aiming for prestige drama status. The new trailer is tense and very NSFW, but doesn’t give much away about the show’s plot or characters.

We’re curious to see how HBO markets Westworld in the months leading up to its premiere in the fall. This teaser aired during Game of Thrones, and highlights the kind of imagery you often see in Game of Thrones itself: grizzled old men talking to naked young women, plenty of bloody murder, a screaming woman being dragged along by the hair, and a literal pile of naked corpses.

However, with Person of Interest creator Jonathan Nolan as one of the showrunners, we’re confident that Westworld will tackle some interesting questions about artificial intelligence, even if the early trailers are geared more toward shock value.