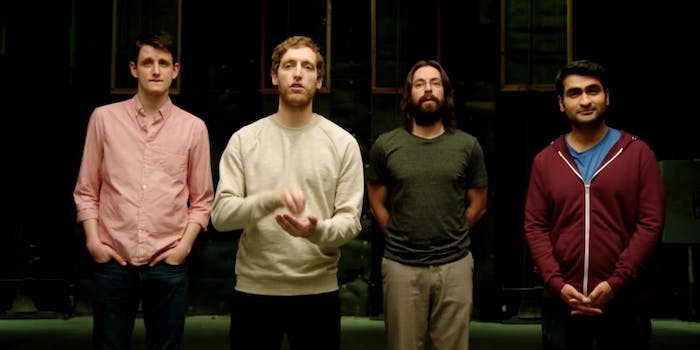 Breaking news: Some nerds are going to spend some time hanging out on Twitch.

Breaking news: Some nerds are going to spend some time hanging out on Twitch. In this case, the nerds in question are the cast members of Silicon Valley, who will take to Amazon’s live streaming platform to host a Q&A, play games, and share an episode of the show ahead of its season 2 premiere.

Silicon Valley, which follows a group of programmers as they build a file compression algorithm, will return to HBO on April 12, directly proceeding the season 5 premiere of Game of Thrones. Four days earlier, it will come to the Twitch’s official channel, where, among other festivities, the first episode of the first season will stream in its entirety.

The four cast members who will participate in the Twitch event are Thomas Middleditch, Kumail Nanjiani, Martin Starr, and Zach Woods. Variety notes that Middleditch, who portrays Silicon Valley’s protagonist, is also a Twitch streamer himself.

“There is an authentic connection between Silicon Valley and the Twitch audience, and this unique event is a great way to build upon that,” said Sabrina Caluori, HBO’s VP of digital and social media. “Twitch offers a unique opportunity to provide exclusive content and a highly social experience to this influential community.”

HBO’s decision share a full episode with online viewers is nothing new. When Silicon Valley first arrived in 2014, HBO put the first episode on YouTube (it has since been removed.)

The Silicon Valley Twitch event will begin at 3pm EST on April 8. In addition, more clips from the show can be found on HBO’s YouTube channel.