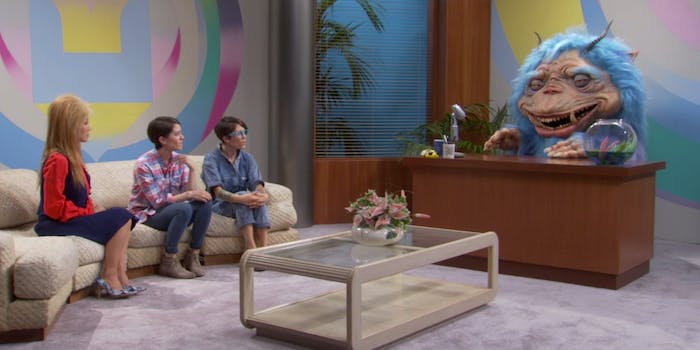 Moby and Johnny Knoxville are set to guest star.

HBO could soon be home to an odd extraterrestrial character and talk show host. The television network has ordered a pilot from Funny or Die based on its YouTube webseries The Gorburger Show.

Created by directors and writers Josh Martin and Ryan McNeely, The Gorburger Show will be based on the same premise as the Funny or Die series. In Gorburger, the titular character (voiced by T.J. Miller) is a giant blue alien who has taken over a Japanese talk show, holding the staff and crew hostage while attempting to learn about humanity by way of celebrity, artist, and cultural icon interviews. The HBO pilot of Gorburger will feature guest stars Moby, Ed Helms, and Johnny Knoxville, as well as a performance from the band Eagles of Death Metal.

Martin and McNeely will executive produce The Gorburger Show pilot alongside Dave Becky of 3 Arts, Sean Boyle and Mike Farah of Funny or Die, and Akiva Schaffer and Jorma Taccone (two of the Lonely Island guys who have a development deal with FOX) under their Party Over Here production banner. Miller also executive produced and wrote the pilot for HBO, which is currently in production in Los Angeles.

The Gorburger Show is certainly not the first webseries to be picked up by networks for traditional television broadcast. HBO is also working on a six-episode order of Vimeo’s High Maintenance for release later in 2015. And the TruTV network recently picked up two series from CollegeHumor, Adam Ruins Everything and Jake and Amir.

HBO has not revealed a premiere date for The Gorburger Show as of yet.

Screengrab via the Live Room powered by Warner Music/YouTube