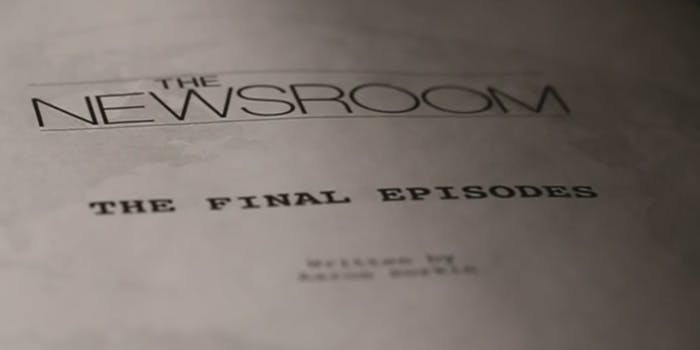 ‘The Newsroom’ tackles Edward Snowden drama in its final season

It looks like season 3 won’t be any easier on Atlantis Cable News than season 2.

The Newsroom is one of those shows you either love, hate, or love to hate. Aaron Sorkin’s HBO drama about a cable news channel and its perpetually righteously indignant anchor has polarized journalists and viewers alike. It’s only fitting, therefore, that Sorkin has decided to tackle the Edward Snowden story in the series’ final season.

HBO released the first teaser trailer last night for The Newsroom season 3, which premieres in November. The 40-second video gives us glimpses of Sorkin’s script pages, hinting at a turbulent ride for news anchor Will McAvoy (Jeff Daniels) as the Snowden story unfolds—and, apparently, draws him into it. Judging from phrases like “Contempt of Court” and “sent to jail” in the teaser, season 3 won’t be any easier on McAvoy and his team at Atlantis Cable News than season 2.

When we last saw our heroes at ACN, they were just beginning to emerge from the wreckage of an Operation Tailwind-like coverage scandal. The Edward Snowden drama, which seemed to be made for television from the get-go, will evidently raise the stakes even higher as the series concludes.