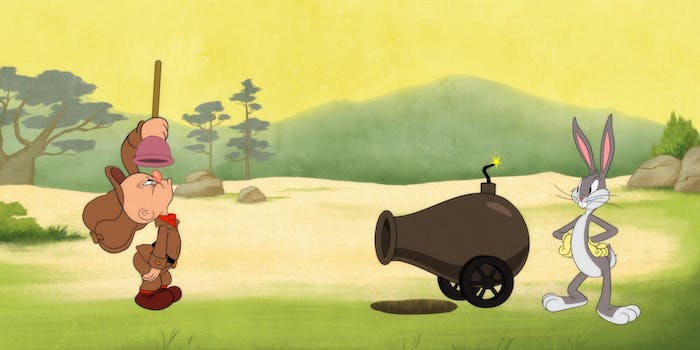 But there will still be plenty of violence in the shorts.

Among the new shows that launched alongside WarnerMedia’s streaming service, HBO Max, is Looney Tunes Cartoons. It’s largely a throwback to the Looney Tunes cartoons of old in both its explosive absurdity and slapstick humor, but there’s at least one difference between the classics and the reboot series.

To be sure, Looney Tunes Cartoons incorporates more modern technology, and Bugs Bunny’s gloves are yellow instead of white. Something much less noticeable unless you’re looking for it? Elmer Fudd and Yosemite Sam—two gunmen who spend much of their on-screen time trying to kill Bugs Bunny—are no longer carrying guns.

“We’re not doing guns,” Looney Tunes Cartoons showrunner and executive producer Peter Browngardt told the New York Times in a recent profile. “But we can do cartoony violence — TNT, the Acme stuff. All that was kind of grandfathered in.”

As Browngardt noted, just because guns aren’t included in the new lineup of Looney Tunes cartoons doesn’t mean that the cartoons don’t include violence played for laughs.

For instance, a 90-second short released on YouTube last year that previewed the series shows Elmer Fudd upping the ante on the violent ways he tries to kill Bugs Bunny. He initially chases Bugs with a scythe, forcibly tries to pull Bugs out of his rabbit hole by his ears, and chases him across water and land. Each time, Bugs meets Elmer Fudd with a bunch of dynamite that explodes in Elmer’s face, increasing in quantity; later explosions are in time with the score.

In Looney Tunes Cartoons’ first episode, Yosemite Sam challenges people to arm wrestling contests instead of pulling out his guns, something that Bugs also meets with dynamite, among other means of violence and humiliation—many of which are self-inflicted.

And even within the classic Looney Tunes cartoons (many of which are streaming on HBO Max), guns were only one way to depict violence. Explosions are practically part of the Wile E. Coyote and Roadrunner cartoons’ DNA. Sylvester and Tweety Bird’s hijinks usually involve household items. Guns are far from the only weapon that Elmer Fudd uses; “What’s Opera, Doc?”, one of the all-time great Looney Tunes cartoons, shows Elmer Fudd hunting Bugs Bunny with a spear.

It’s a testament to Looney Tunes Cartoons that, despite how much has changed, they feel the same, even without the use of one weapon.

“We’re going through this wave of anti-bullying, everybody needs to be friends, everybody needs to get along,” story editor Johnny Ryan explained. “Looney Tunes is pretty much the antithesis of that. It’s two characters in conflict, sometimes getting pretty violent.”