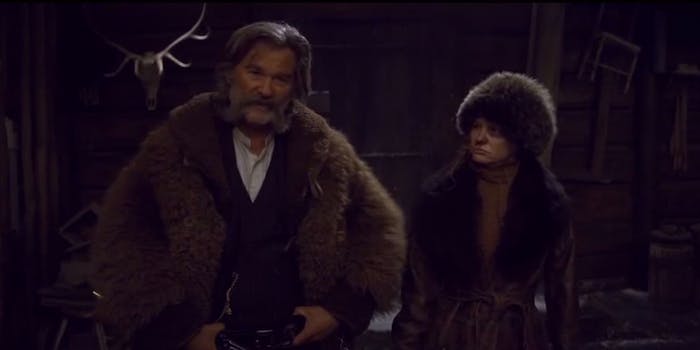 Someone already mashed up ‘The Hateful Eight’ with ‘The Thing’

The 'stache is the bridge between two worlds.

The trailer for Quentin Tarantino‘s The Hateful Eight finally landed online Wednesday, and the Internet wasted no time mashing it up.

Specifically, the existence of Kurt Russell as The Hateful Eight‘s swarthy John “The Hangman” Ruth offered an easy way to stitch the trailer into the snow-covered hellscape of The Thing, John Carpenter’s 1982 horror film, in which Russell plays swarthy protagonist MacReady.

Garrison Dean, an io9 contributor, created this wonderful homage to bearded Kurt Russells in films full of menace, pairing dialogue from The Thing with the Hateful Eight trailer. It’s almost like Tarantino was willing this mashup into existence with Russell’s line at the end.