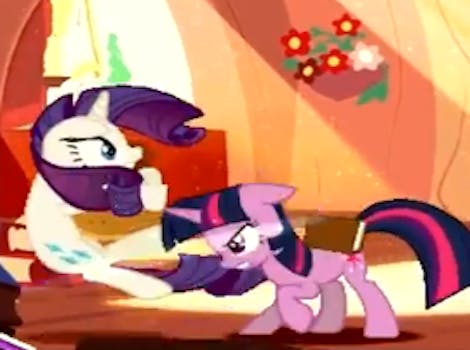 Based on the beloved animated series My Little Pony: Friendship is Magic, Fighting is Magic underwent nearly two years of development.

Last week Mane6 received a cease-and-desist letter from Hasbro over its much-anticipated game My Little Pony: Fighting is Magic, the company announced on its website.

Based on the beloved animated series My Little Pony: Friendship is Magic, Fighting is Magic underwent nearly two years of development. Though it was still in pre-release mode, it was already so popular it was a finalist for the 2013 EVO Fighting Tournament and had generated fanart, custom skins, and more. It featured popular ponies from the show like Rarity and Twilight Sparkle as selectable game characters whom players could pit against each other in virtual battle.

The game’s mass appeal and high level of design already had garnered widespread enthusiasm from bronies. There was just one problem: Despite Hasbro’s clear trademark policy, Mane6 never received permission to license the My Little Pony products, logos, or images, all of which were freely used in the game.

“We have received a C&D letter from Hasbro’s Legal representatives, asking us to cease game development, remove any materials that might contain My Little Pony characters, names, locations or related elements from the sites we control (Our site, our youtube, our twitch), and ‘cease any further use of [their] MY LITTLE PONY property’,”  Mane6 stated Friday. “We have attempted negotiating with Hasbro for the continued use of the property in our non-profit, voluntary project, but so far we haven’t received an answer.”

This isn’t the first time Hasbro has issued successful takedown notices for clearly illegal uses of its product, or even the first time it’s taken down an MLP-inspired game. Previous instances where Hasbro has stepped in include the illegal download website Ponyarchive and the popular, though short-lived,multiplayer game MLP Online. Hasbro also took down the abridged series Friendship is Witchcraft, which should have been protected under under the Fair Use copyright clause afforded to transformative works within the U.S.

However, issues of copyright and trademark are separate concerns with separate legal justifications. While Hasbro has so far been tolerant of copyright-protected fanwork such as fanart and fanfiction, it seems to have a rigid policy forbidding reuse of its official images and trademarks. For example, its stance on customized Monopoly games is quite clear: Personalization of the game is relegated to one licensed game distributor and prohibited for all other vendors.

Judging by a widely leaked game demo, Fighting is Magic clearly featured trademarked images and names, and the public game FAQ made no mention of Mane6, which declared the game not for profit.

In an editorial about the takedown, Equestria Daily, while incorrectly claiming that “every instance of fanwork… is illegal,” accurately points out that the high-profile nature of the game made it a perceived threat to Hasbro’s branding and the wholesome image of the product:

“By creating such a high quality work with exceedingly strong ties to the trade dress of Hasbro and Friendship is Magic, Mane6 unfortunately found themselves in a situation where any lack of action on Hasbro’s part would be implicitly granting Mane6 a license for their product. For all of the moving and shaking the brony community has done, it has never replaced the original target of My Little Pony – young girls. Although the action is cartoony and bloodless, Hasbro could never and would never allow a license to be granted for a game in which their children’s entertainment media figures beat the stuffing out of each other.”

Most commenters on the article and bronies everywhere appeared to disagree: a petition to Hasbro requesting the reinstatement of the game currently has 14,000 signatories. Noted brony Purple Tinker, who founded BronyCon and was featured in a recently released brony documentary, argued on her Tumblr that Hasbro’s reasoning was short-sighted:

“Licencing Fighting Is Magic (a family-friendly game with G-rated fighting very much like the fight scenes Hasbro themselves have shown on My Little Pony: Friendship is Magic) would be extremely unlikely to offend Hasbro’s shareholders, or the All-Powerful Target Audience of 6-12-year-old (or whatever) girls and their toy-buying parents, as it is— as [Equestria Daily] noted— ‘cartoony and bloodless’, just like the fight scenes in the show itself. This is not Mortal Kombat or even Street Fighter. It’s more like Super Smash Brothers— a “kiddy game”, a game appropriate for young and old.”

In response to the controversy, Friendship is Magic creator and artist Lauren Faust tweeted an offer to Mane6 create new “original” characters without trademark issues, most likely cute little fawns, for use in a franchise-free reboot of the game concept. But it’s not clear whether that will be enough to escape Hasbro’s legal team or whether Mane6 will have the resources—much less the community support—to start all over again.