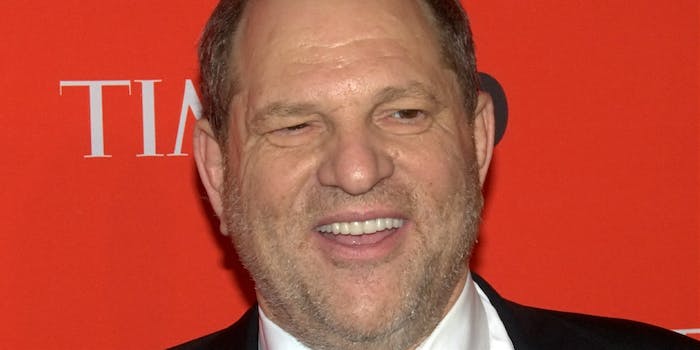 Harvey Weinstein banned for life from Producers Guild of America

'Sexual harassment can no longer be tolerated in our industry or within the ranks of Producers Guild membership.'

The Producers Guild of America has unanimously voted to give Harvey Weinstein a lifetime ban after he was accused of sexual misconduct by more than 80 women.

The Producers Guild had already voted to terminate Weinstein’s membership on Oct. 16, which took place a couple days after Weinstein was expelled from the Academy of Motion Picture Arts and Sciences. This next step, taking place after Weinstein chose to resign his membership following the first vote, is the Producer Guild demonstrating how serious it is taking the accusations against Weinstein. In a statement, it pledged that: “Sexual harassment can no longer be tolerated in our industry or within the ranks of Producers Guild membership.”

“As was recently reported, the Producers Guild’s National Board of Directors voted unanimously to initiate proceedings to terminate the membership of Harvey Weinstein. The PGA Constitution requires that members be given 15 days’ notice before disciplinary action is taken. The Guild has received notice that rather than addressing the Guild’s charges, Mr. Weinstein elected to resign his membership in the Producers Guild.

In light of Mr. Weinstein’s widely reported behavior—with new reports continuing to surface even now—the Producers Guild’s National Board has voted unanimously to enact a lifetime ban on Mr. Weinstein, permanently barring him from PGA membership. This unprecedented step is a reflection of the seriousness with which the Guild regards the numerous reports of Mr. Weinstein’s decades of reprehensible conduct. Sexual harassment can no longer be tolerated in our industry or within the ranks of Producers Guild membership. As stated previously, the PGA’s Officers and National Board of Directors have created the Anti-Sexual Harassment Task Force specifically charged with researching and proposing substantive and effective solutions to combat sexual harassment in the entertainment industry.”

Since the accusations first came to light nearly a month ago, Weinstein—who has denied “any allegations of nonconsensual sex”— has checked himself into a rehabilitation facility in Arizona. But reports that Weinstein wasn’t taking his treatment seriously and that he “believes he is a savior … born to take the fall for his behavior in order to ‘change the world’” have surfaced, the latter which Weinstein’s rep has denied.