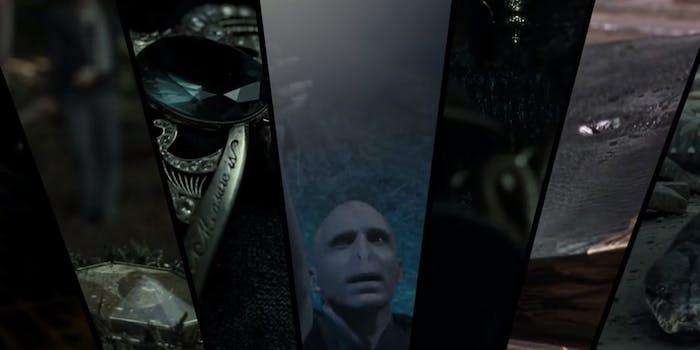 In the Harry Potter vs. the World mashup trailer, Edgar Wright’s cartoonish aesthetic combines with those epic wizarding duels, courtesy of YouTube mashup artist The Unusual Suspect (who previous made this Star Wars/Guardians of the Galaxy video).

A Scott Pilgrim/Harry Potter mashup trailer isn’t the most obvious idea, but the result is pretty awesome.

The trailer takes on the comedy/music-video style of Scott Pilgrim vs. the World, complete with on-screen annotations and what must be a complete compendium of every teen romcom-style joke in the entire Potter franchise. Imagine if all of Harry and Voldemort’s showdowns had included this kind of split-screen technique! Although admittedly they would’ve ended up looking kind of like Pokémon.

Despite being set in a high school, the Harry Potter series never really felt like teen movies. Adding a touch of Scott Pilgrim really brings out the adolescent awkwardness though, and the indie rock soundtrack feels weirdly fitting.

Screengrab via The Usual Suspect/YouTube