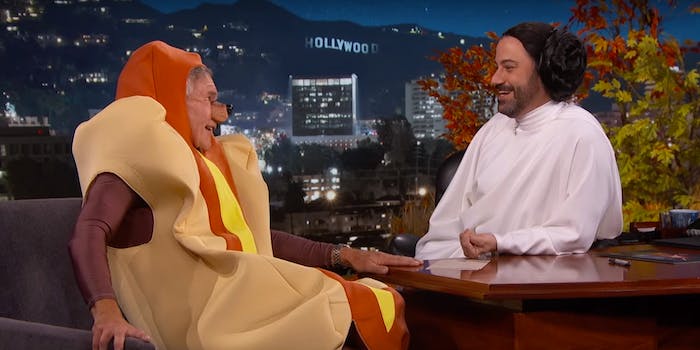 He knows all and reveals little.

Harrison Ford got into the Halloween and Star Wars spirit when he dressed up as a hotdog to chat with Jimmy Kimmel.

Ford discussed both his plane crash and the ankle injury he sustained on the set of The Force Awakens. According to the official report obtained by Kimmel, police were called to London’s Pinewood Studios to aid a 71-year-old man who was injured by a garage door.

While Ford seemed as excited as the rest of us about The Force Awakens, he can’t say anything about it—although he wouldn’t even if he could, because why ruin it for everyone?

Like many actors, Ford has perfected the art of saying a lot while revealing nothing in between heaping praise on the new cast. Remember, he wouldn’t be sitting there in a hotdog costume if he didn’t think the film was any good.

And of course he knows why Luke Skywalker isn’t on The Force Awakens poster, but he’s not going to tell us a thing about it.

With Ford on hand, it was a Star Wars affair all around. Kimmel dressed up like Princess Leia, Guillermo was Yoda, and even the band got into it. We never thought we’d see the day when Darth Vader rocked out, either.