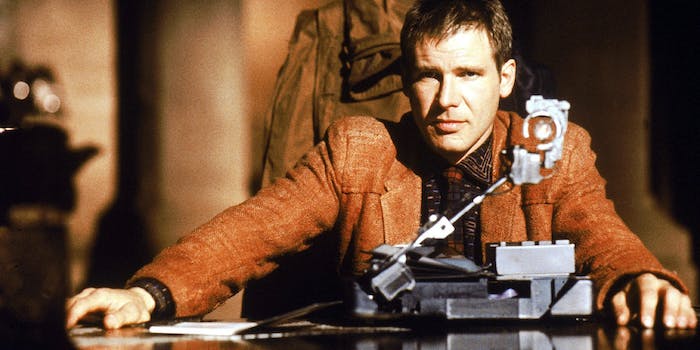 Does Harrison Ford need to be in the ‘Blade Runner’ sequel for it to be good?

Blade Runner is iconic, but it isn’t really franchise material.

Following up the return of Indiana Jones and Han Solo, Harrison Ford has just been offered a role in Blade Runner 2.

Ridley Scott is attached to direct the sequel, with a script cowritten by original Blade Runner screenwriter Hampton Fancher. In a very unusual turn, Ford was offered the role publicly rather than as part of a private negotiation, perhaps as an attempt to quell the popular opinion that a Blade Runner sequel would fail to live up to the standards of the original.

Alcon Entertainment, the production company working on Blade Runner 2, released a statement saying, “We believe that Hampton Fancher and Michael Green have crafted with Ridley Scott an extraordinary sequel to one of the greatest films of all time. We would be honored, and we are hopeful, that Harrison will be part of our project.”

The question here is whether adding Harrison Ford to the film would actually be a good idea. Blade Runner is iconic, but unlike classic sci-fi fare such as Star Wars, it isn’t really franchise material. The original movie is a standalone story with an ambiguous ending, so any kind of sequel—particularly one that focuses on the original protagonist Rick Deckard—could easily wind up feeling totally unnecessary.

There’s also the fact that Scott’s recent Alien prequel, Prometheus, received very mixed reviews. The film was a financial success, but many fans felt that it betrayed the original purpose of the early Alien movies by attempting to explain something that should have remained a mystery. Creating a direct sequel to Blade Runner seems like a similar step, whereas Scott’s earlier sequel plans (which focused on a new character in the same basic universe) seemed like less of a risk to the iconic nature of the original movie.

There’s no doubt that a Blade Runner sequel with Harrison Ford in the lead role would be a box office success. The question is whether Ford and Scott are willing to sacrifice the reputation of the original movie in order to make money from a sequel. When Alcon describes Blade Runner as “one of the greatest films of all time,” it isn’t exaggerating. For many people, Blade Runner is the Casablanca of sci-fi filmmaking, and attempting to make a suitable sequel about Rick Deckard would be a pointless exercise.