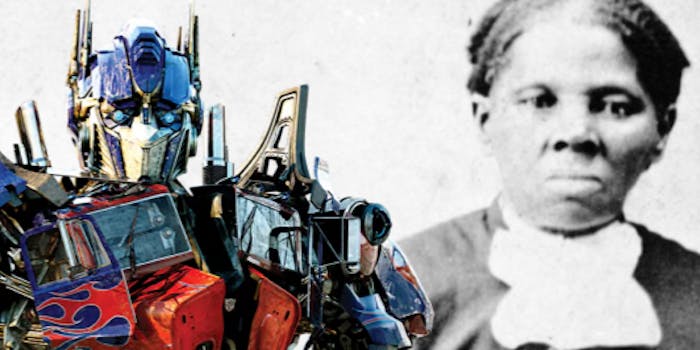 By day they freed slaves. By night they battled for Earth.

In the new Transformers film The Last Knight, it is mentioned that the Transformers had a secret society that helped them throughout history. The secret “order of the Witwiccans” was an organization made up of people who’s purpose it was to protect the Transformers and fight for just causes. They must have had an amazing social network because among their members were Shakespeare, Mozart (can you imagine Autobots getting down to Symphony No. 40?), Stephen Hawking, Harriet Tubman, and Sam Witwicky (Shia LaBeouf). Honestly, without the Witwicky name it’s unclear how Sam made the cut in this all-star lineup.

The historical backstory is a bit of a stretch for the film, but hey, someone had to be protecting them all along. However, many are wondering how the Transformers helped Witwiccans in return. Mainly everyone is wondering how the Tubman-Transformer worked in terms of logistics.

Harriet Tubman and the transformers saved the slaves you GUYZ

I will not lie:

I would spend cash money for the Harriet Tubman Transformers spinoff.

Let’s break this down. Tubman was busy during her time helping slaves escape using the underground railroad. Your average Transformer, even in their normal-sized form, sticks out like a sore thumb. Just imagine Tubman, freed slaves, and Transformers all traveling in secret together and staying in safe homes.

By day they freed slaves, by night they battled for Earth. Sounds legit.