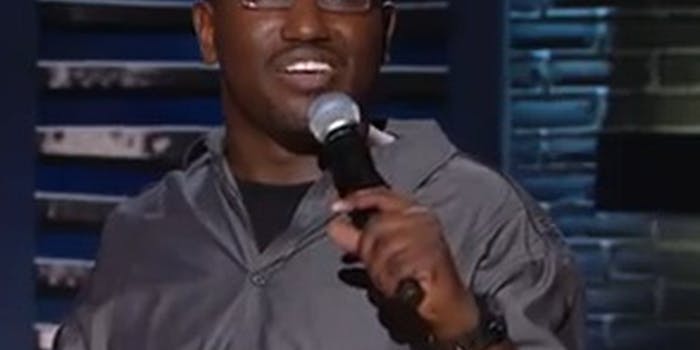 The former Saturday Night Live writer may be one of the freshest new voices in comedy, but he saves his best material for the stage.

“I survive for stand-up,” he told the Daily Dot.

“I’m not always trying to be funny on Twitter. Sometimes, I’ll just post about a show, or sometimes I’ll just reply to something somebody’s said. I’m not one of those people who tweets jokes all the time.”

The former Saturday Night Live writer has a deadpan approach to his stand-up that brings unexpected laughs when his tone shifts. His deliberate delivery makes his intelligent, cleverly worded jokes even better. As one YouTuber put it, “He’s unique and original, and funny as hell.”

While his tone might not always come across in 140 characters or less, some of what Buress posts on Twitter even makes it into his routine.

“There have been some jokes I’ve tried on Twitter that have gotten a good response, so I tried them on stage and they work,” said Buress, who occasionally appears on 30 Rock as the homeless guy. “There’s been a couple of those in my act, but I’m leaning more towards telling stories in my act now so I’m not doing as many short jokes.

“Twitter can be a good testing ground for comedy.”

For example, check out this string of tweets Buress pushed out to his more than 58,000 followers on June 3.

“brb, I’m about to pop an Aderall and take over the world.”

“I’m about to become America’s premiere comic specializing in humor about porcelain veneers.”

“People try to say comedy is “dry” as an insult. I wanna tell them that their life is dry.”

Later that day, at the weekly comedy night Buress hosts in Williamsburg, N.Y., I heard him talking about those very tweets.

As witnessed by the rise of Rob Delaney, Twitter is increasingly becoming a springboard for aspiring comedians, helping to develop audience, branding, and voice in the community.

But for Buress, who joined back in 2009, it doesn’t have to be serious business.

“I use it for what I want to use it for,” he said. “That’s the beauty of it. You’re not forcing anybody to read that stuff.”