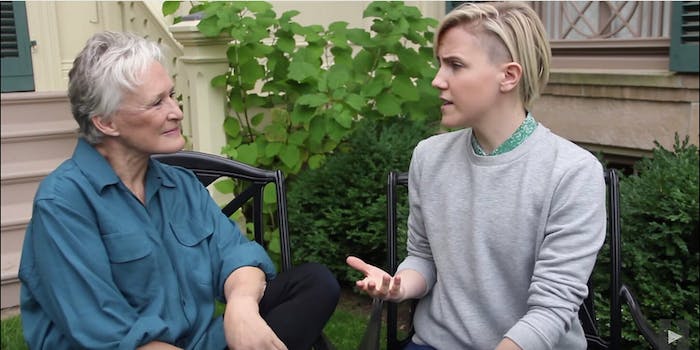 'I think stigma is anything that marks somebody as different.'

Vlogger and My Drunk Kitchen star Hannah Hart has rolled up millions of views on YouTube and emerged as one of the video site’s biggest stars. Hart’s popularity has made her into a role model for many young women, and that status allows her to connect with her viewers on important issues. In a recent video, she tackles the subject of mental health alongside a very special guest: actress Glenn Close.

Close comes onto Hart’s channel not as Cruella de Vil but as the founder of Bring Change 2 Mind, a nonprofit that works to eradicate mental health stigma in schools. Hart has a lot of fans who are of scholastic age, and they are ideal recipients for Close’s message. In a short video, Hart and Close talk about the steps needed to improve our society’s relationship with mental illness. Close also discusses mental illness as it relates to her own family; she has a sister who lives with bipolar disorder and a nephew who has a schizoaffective disorder.

The video is the latest instance of a YouTube star facing students and offering up a PSA of sorts. Tyler Oakley, for example, teamed up with First Lady Michelle Obama to extol the benefits of higher education.

For Hart the collaboration joins the other videos she has made alongside well-known actresses. In addition to Close, she has also hung out with Mary Louise Parker and Sarah Silverman. She has also talked about mental health on her channel in the past, particularly in a video featuring fellow YouTuber Kati Morton. Her latest video arrives just after the end Mental Illness Awareness Week, and her contribution to the ongoing mental health discussion is worth watching.