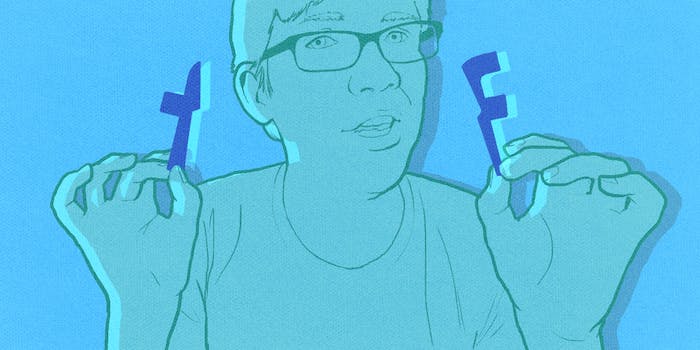 Hank Green called out the platform for 'theft' and 'lies' on his Medium blog.

Facebook may claim it’s now streaming more videos than YouTube, but some of YouTube’s biggest creators are up in arms over the validity of those claims.

“If I embed a YouTube video or Vine on Facebook, only a tiny fraction of my audience will actually see it,” he writes. “But if I post the same video natively on Facebook, suddenly it’s in everyone’s feed everywhere!”

Green’s frustration is supported by third-party data. Sonja Foust of Duke University crunched numbers on how posts do when uploaded to Facebook as a YouTube embed and as a native video, with native video returning drastically higher view counts. Facebook clearly prioritizes native video, although this isn’t shocking in and of itself; it’s the company’s own product, and it’s in Facebook’s best interest to keep users in its app or on its page for as long as possible, rather than sacrificing those users to a third-party site.

Second, Green disputes how Facebook measures “a view.” When Facebook introduced autoplay in 2013, the company promoted it as something that made video watching easier. With the combination of autoplay and low standards for what counts as a view compared to what YouTube considers a view, it’s easy to see why Facebook numbers have skyrocketed in recent months.

“Facebook counts the ‘view’ at the three second mark (whether or not the viewer has even turned on the sound) in the midst of a precipitous decline in retention,” Green writes. “At that moment, 90% of people scrolling the page are still ‘watching’ this silent animated GIF. But by 30 seconds, when viewership actually could be claimed, only 20% are watching. 90% of people are being counted, but only 20% of people are actually ‘viewing’ the video.”

For social video, YouTube is the lone holdout at 30 seconds of viewing time, with Facebook pushing in the industry standard down to the three-second mark (or one full loop in the case of Vine.)

Finally, Green takes offense with the culture on Facebook of simply stealing and reuploading YouTube videos. He points to an Ogilvy and Tubular Labs report that says, “of the 1000 most popular Facebook videos of Q1 2015, 725 were stolen re-uploads.” He says Facebook is slow to correct these errors and is thus building its claims of high viewership on the backs of stolen, fabricated views.

“When Facebook says it has roughly the same number of views as YouTube, what they really mean is that they have roughly 1/5th of YouTube’s views, since they’re intentionally and blatantly over-counting to the detriment of everyone except them,” Green writes.

He’s not alone in his dissatisfaction. The Fine Bros., who produce the popular React series on YouTube, have been vocal about their frustrations with Facebook video both before and after Green’s post.

@gstrompolos But totally agree .. we can't keep up at all with the illegal posting of our content there.

Facebook is the internet 10 years ago and no one seems to care – autoplay views/stealing content does not = Success. https://t.co/1Ne3cVEF94

Matt Pakes, Facebook’s product manager responsible for video products, responded to Green with his own Medium essay, in which he claims that native video is getting more engagement because people prefer it to clicking a link.

“Over years of developing and tuning News Feed, we know that clicking on a link to play video is not a great user experience, so people tend to interact slightly less with non-native video, and the posts get less engagement,” Pakes writes.

He also claims that the three-second mark for measuring video is the metric aimed at capturing the breadth of video, from six-second Vines to 10-minute short films.

“If you have stayed on a video for at least three seconds, it signals to us that you are not simply scrolling through feed and you’ve shown intent to watch that video,” he writes.

As for pirated video, as Green points out, YouTube itself was a bastion for copyrighted content, especially in its early stages. But as the platform matured from under-the-radar startup to the video arm of Google, it implemented fixes like the Content ID system that flags videos with potential copyright violations by scanning each video against a massive database of registered material. Facebook, which entered the video game as already a multibillion-dollar enterprise, has no such system in place yet. Pakes notes that Facebook uses Audible Magic to identify IP and says to expect more info “later this summer.”

While Green’s essay is getting widespread attention in the media, many fellow YouTubers are keeping quiet. In part this relates to what Green sums up in his essay: an overall shrug about the issue because Facebook is such a behemoth. It’s now also the second social media platform, after YouTube, with a pilot program that plans to actually share revenue with creators. The lure of that Facebook cash might be keeping some mum on the topic of video views. Creators can share metrics of their own inflated Facebook views as a sign of success, even if that doesn’t yet translate into a paycheck.

Regardless, thanks to Green, all eyes are on Facebook video to see if any significant improvements will come to help content creators retain control of their video.

“First, you just can’t tell me that 3 seconds of an auto-played video should count as a view,” he writes. “No one can argue that.” Green goes on to blast Pakes for Facebook not taking its video issues seriously and not being upfront with creators and the press.

“I am very interested in the strategies and systems you’re planning to use to crack that nut, so keep me posted,” Green writes in conclusion. “But I have a lot of anxiety that the systems and culture that creator communities have built over the last ten years are going to be torn apart because Facebook’s bull decided to wander into our rather lovely china shop without any thought to what interesting things might actually be happening there.”