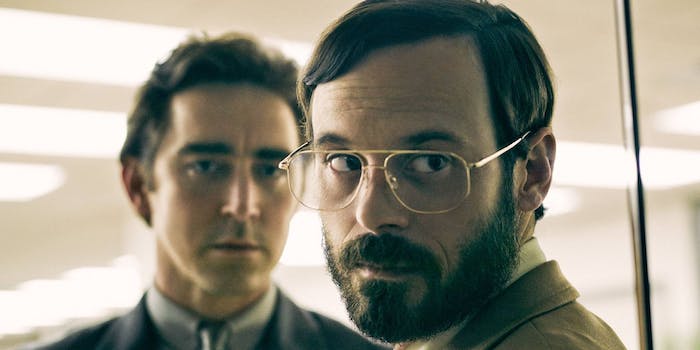 The AMC formula strikes again with ‘Halt and Catch Fire’

By copying its first two successes again and again, the brand has gone from daring to boring.

The protagonist of AMC’s new drama is smart, sexy, and mysterious. He’s also a great salesman, climbing to the top in a very competitive world. That world, incidentally, has a lot do with the one we live in today, even though the story this protagonist inhabits is a period piece. While we don’t know much about his tortured past yet, we know he’s driven and ruthless, and by all accounts, effortlessly charismatic.

And before we go on, it’s probably worth mentioning that he’s not Don Draper. Well, not exactly.

This week, both BuzzFeed’s Jace Lacob and Entertainment Weekly’s Jeff Labrecque noticed similarities between Lee Pace’s Joe McMillan, the lead character in the recently debuted Halt and Catch Fire, and Jon Hamm’s iconic role on AMC flagship show Mad Men. Lacob suggests, “It’s no coincidence that Joe is introduced to the audience as he runs over an armadillo, trailing destruction in his wake, wherever he goes, not unlike Mad Men’s Don Draper before him.”

Labrecque takes it a step further. He posits that not only is McMillan a version of Draper, but that the show’s second biggest character, the brilliant but unsuccessful Gordon Clark (Scoot McNairy,) is a version of Breaking Bad’s Walter White. Labrecque elaborates: “Joe is handsome, dapper, and extremely smooth in front of an audience. … Gordon is a hard-working schlep, an idealistic computer engineer who has played by the rules and has nothing to show for it. Like Walter White, he’s also bitter about losing out on his greatest intellectual achievement.”

It should be noted that despite these heavy comparisons, Lacob and Labrecque both liked the show quite a bit. Lacob gushes, “Joe creates an arms race on the forefront of the technological revolution and the result, at least if the pilot is anything to go by, is intoxicating to watch. … [T]he bare bones of the series opener offer up an incredibly appealing cast, exquisitely sculpted dialogue, and a gorgeous soundtrack that makes the wait for the second episode absolutely unbearable.” And Labrecque invokes the T.S. Eliot quote, “Immature poets imitate; mature poets steal; bad poets deface what they take, and good poets make it into something better, or at least something different.”

So the question becomes, how different is Halt and Catch Fire from its predecessors really? While reactions to the show have been mostly positive, it’s still hard not to get the feeling that it may just be a lesser version of better AMC series that came before it.

It’s difficult to say why exactly AMC is struggling for new ideas, although there is a sense in which it’s possible that the golden age of AMC was over before it even began. A New York Magazine profile on AMC from 2011 by Michael Idov mentions the departure of two executives, Christina Wayne and Rob Sorcher, both of whom were instrumental in getting Mad Men on the air (in his book Difficult Men, author Brett Martin also hints that several key players were pushed out by AMC after their initial burst of creativity).

Then there’s the contentious relationship AMC has had with many of its showrunners. Two have already been fired from zombie hit The Walking Dead. And Idov’s article also details the nasty back and forth that went on during a spat between AMC and Mad Men showrunner Matthew Weiner during contract negotiations. Still, Breaking Bad showrunner VInce Gilligan always insisted it was a nice place to work.

The real reason, however, that Halt and Catch Fire (along with most of AMC’s other original shows in the last couple years) feels like a watered-down version of better AMC series is because that’s how AMC wants it to feel. Executive Vice President Joel Stillerman has been even quoted as saying, “I’m not afraid of diluting the brand.”

Basically, AMC wants to replicate the formula of Mad Men and Breaking Bad, with the awards and the ratings, but to do it without taking any of the risks. For instance, The Walking Dead has ridiculously good ratings, but it isn’t exactly a critical darling. Like its network brethren, it has plenty of darkness and despair, but its rare to hear anyone say the characters are as nuanced as the ones walking around at Sterling Cooper. As Idov puts it, “the main distinction between The Walking Dead and its AMC predecessors was … well … it wasn’t great. It wasn’t bad, by any means, but the level of artistic ambition everyone had come to associate with AMC was largely absent. … There wouldn’t be think pieces about it in The New York Review of Books.”

But despite the colossal success of The Walking Dead, AMC’s watering-down strategy hasn’t worked that well with any of its other efforts. Since 2010, Rubicon, The Killing, Low Winter Sun, and Turn have all struggled to make a name for themselves. Western Hell on Wheels has gradually become a sleeper hit, although it attracts so much less attention than the network’s bigger shows, it’s hard to remember it’s even on the same network.

The obvious issue with these shows is that they all revolve around brooding white men. Only The Killing, so far, has branched out, daring to follow a straight white woman (The Killing will have one more season this year, but it will air on Netflix, rather than AMC.) With antihero fatigue, and masculinity fatigue starting to grow on cable TV, AMC’s rigid approach to characters is starting to look even more problematic. Of course Don Draper and Walter White are great characters, but to assume that every straight white male with a secret is going to be just as interesting has already harmed the network’s track record.

Everyone talks about how The Sopranos put HBO on the map, but they tend to gloss over the other deeply formative show for the network: Sex and the City. The two couldn’t be more different, yet HBO’s snooty “It’s not television” mantra remained the same then, as it does now. And while AMC’s other major competitor, fellow basic cable network FX, also broke out with a show about a manly antihero in the form of The Shield, it has gone every which way since, with a lineup that over the years has included It’s Always Sunny in Philadelphia, Damages, Sons of Anarchy, Justified, Louie, American Horror Story, The Americans, The Bridge, and Fargo. FX has also had many failures along the way, but it built a brand by taking on the kind of shows that other basic cable networks won’t.

That idea used to be part of AMC’s brand too. Mad Men and Breaking Bad were famously shopped around to HBO and FX before landing at AMC. But by copying those first two successes again and again, each time a little less surprising, the brand has gone from daring to boring.

The most fascinating part of Idov’s AMC piece is when Joel Stillerman talks about passing on House of Cards, saying, “It won’t make me happy if it becomes a piece of landmark TV.” Sure enough, House of Cards did go on to become a landmark piece of TV. But even more fascinating is the fact that Orange Is the New Black is Netflix’s most watched show, and even more of a landmark moment for television. Stillerman could learn something from this development; sometimes, people want an alternative to the standard white, male antihero.

Halt and Catch Fire could turn out to be very good—maybe even distance itself from Mad Men and Breaking Bad, assuming it plays its cards right. But AMC doesn’t need another Don Draper or Walter White, and if it wants to continue to be a major player, it’ll have to change up its formula quick. Because you can only water down the real deal so much before there’s no flavor left at all.