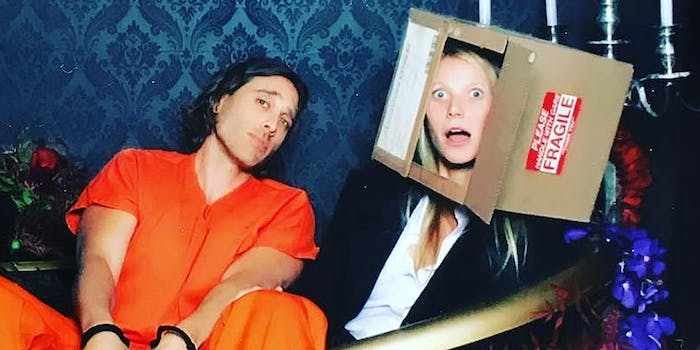 Gwyneth Paltrow went as a ‘Se7en’ spoiler for Halloween

It’s one of the most deconstructed and parodied scenes of the last 20 years. “What’s in the box?” pleads Brad Pitt’s Detective David Mills at the end of David Fincher’s 1995 thriller Se7en.

We never see what’s in the box, but the gruesome truth is spelled out. And now co-star Gwyneth Paltrow has a definitive answer. She posted a photo to Instagram with boyfriend Brad Falchuk, who appears to be dressed as Kevin Spacey’s diabolical John Doe.

And her head in the fuckin’ box.

Screenwriter Andrew Kevin Walker said in 2015 that the gory ending was not included in the studio rewrite, but Fincher fought for the scene to be included: “There’s nothing wrong with up endings, it’s just that the dark ending of Se7en was what it was about. To change the ending to something else was to remove the very heart of the story.”