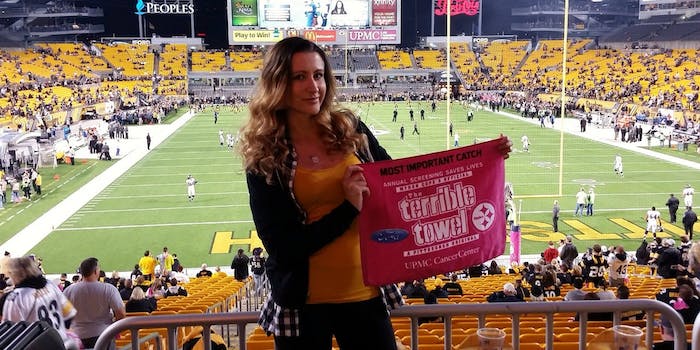 It all began with a Tinder date.

Eleven months ago, Alicia Barnhart vowed to be more spontaneous. For Barnhart, it was a “new year, new me,” and though she hadn’t had much luck with Tinder in her hometown of Columbus, Ohio, she was visiting Los Angeles and decided to give the dating app another chance. She stumbled upon a guy named Sean Leaf who works in sports, like Barnhart, and he was cute. She figured they’d have at least a little in common.

So, she swiped right.

Less than a year later, after 36,772 miles flown and driven, after about $8,000 spent, after a date with Sean that was fun but didn’t spark a long-lasting romance, Barnhart opened an email from the Guinness Book of World Records.

The message was simple and to the point. She had been verified, and she was now an official world record holder. At that moment, she was officially the fastest person to visit every NFL stadium. She managed to see 31 NFL stadiums (the Giants and Jets shared MetLife Stadium) and 32 NFL games in 86 days, and if Barnhart—who also has visited every Major League Baseball stadium and blogged about all of it on Ballparks on a Budget—hadn’t swiped right on Sean’s profile, this probably never would have happen ed.

“My job was stagnant, and I was tired of going to the same baseball stadiums,” Barnhart told the Daily Dot. “I told [Leaf] I needed to see more parks and that I was thinking about going to Japanese ballgames or the Caribbean to expand, and the guy was like, ‘Why aren’t you doing the NFL?'”

It was a good question and one she hadn’t considered. She learned the NFL record hadn’t been broken since 2002 when Peter Baroody accomplished the feat in 107 days (though he didn’t have the benefit of Thursday night games). Barnhart soon decided: Not only did Barnhart want to break Baroody’s record—she wanted to crush it.

When she’d get home from work as a producer at a Columbus sports talk radio station, she’d study the NFL schedule and try to plan strategically. For instance, she didn’t want to travel to San Francisco to see a 49ers game only to have to return to Oakland at a later date to catch the Raiders (luckily in that case, the Raiders played at home on the Sunday of Week 1 and the 49ers happened to be facing the Vikings the next evening on Monday Night Football).

Barnhart printed out a calendar and a map and placed the team logos and what week she’d visit in order to get her bearings straight. 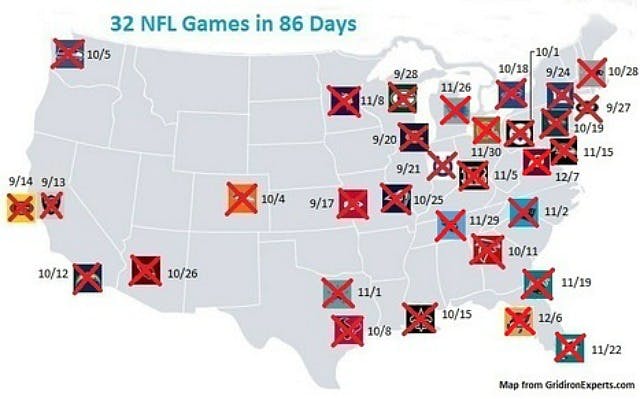 She also needed to invent a name for her new website. Barnhart already had created the baseball blog, but for her football adventure, she went with a name that suits her passion and her personality. She went with Sports Wanderlust.

“I definitely have that wanderlust gene,” she said.

She also has that budgeting gene. Since she quit her job in order to take on this challenge, Barnhart needed to do it on the cheap. Luckily, she had plenty of knowledge.

“I grew up with a cheap dad,” she said. “My dad is an extreme couponer, and the only thing he spends money on is Ohio State football. He’s great.”

Obviously, she learned plenty from her father. Since she’s centrally located in Columbus—she grew up in Cleveland but moved southwest to attend Ohio State— she could drive to Cleveland, Cincinnati, Detroit, Chicago, Indianapolis, Philadelphia, Pittsburgh, and Baltimore. She flew to Jacksonville, Florida, but took a bus to Miami afterward.

She traveled with her own food, armfuls of QuestBars, oatmeal, and bananas. When she was hungry and driving, she’d stop at a convenience store and buy a big bag of Chex Mix. She ate way too many Skittles. Sometimes the Chex Mix and the Skittles would be her dinner for an inexpensive, if not altogether healthy, meal.

Barnhart also opened a Southwest Airlines credit card, and she racked up enough points to get five free flights out of it. She slept in Airbnbs and not hotels, and in Jacksonville, she stayed at the home of a woman named Tessa who she originally had met at a tailgate in Green Bay, Wisconsin.

But the traveling and the job-quitting and the faith-leaping and the Skittles-eating probably wasn’t the most difficult part of the trip. No, the part that perhaps wasn’t as enjoyable was making sure she was meticulously recording her trip for Guinness.

She had to submit her GPS tracking, and in order to prove where she said she was, she took plenty of photos and plenty of video. A sampling: 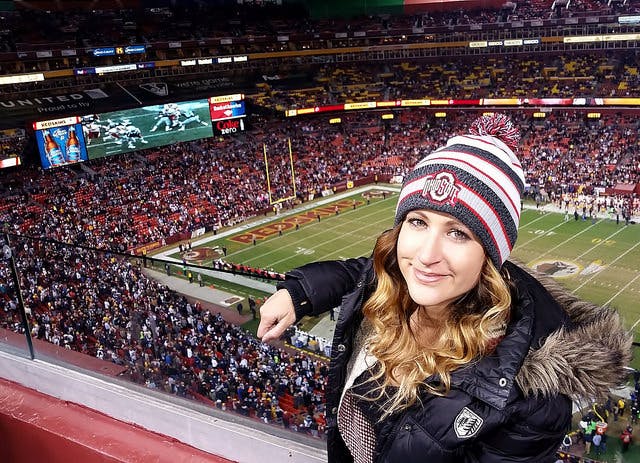 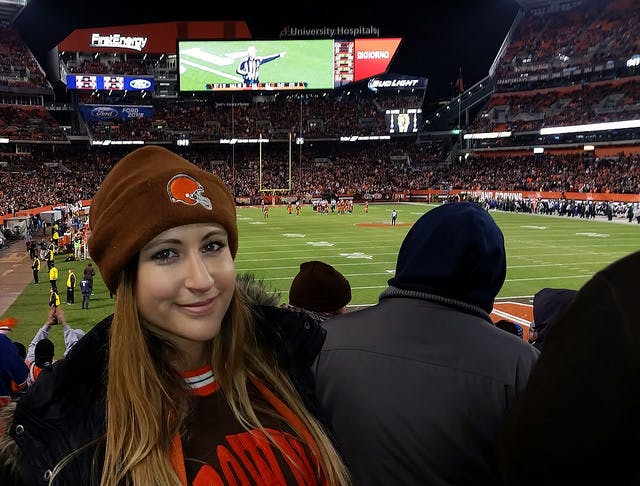 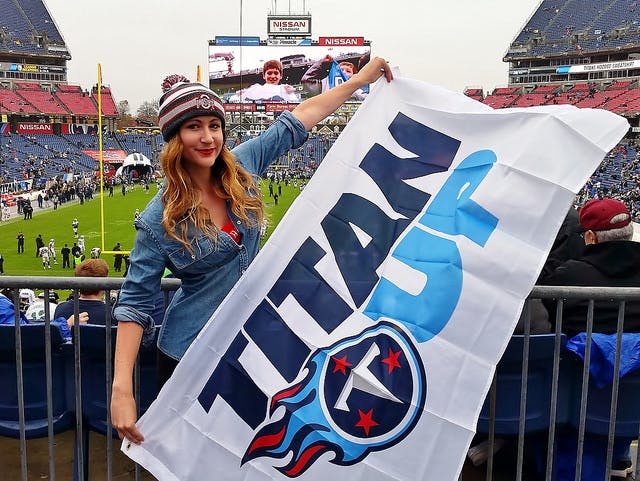 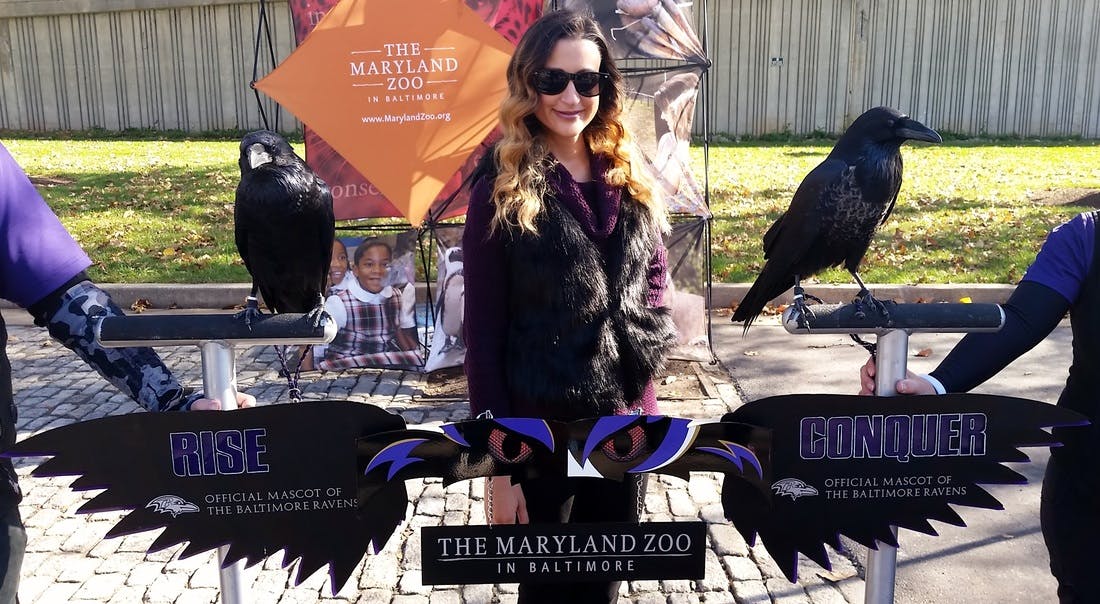 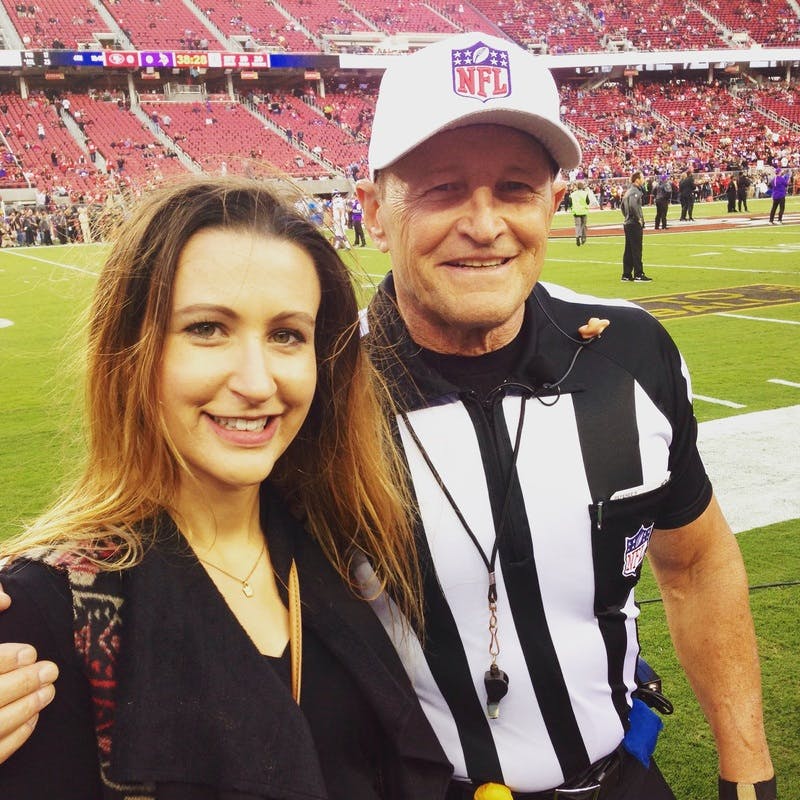 In order to qualify for the world record, she needed witnesses. In August, four months after she had applied to Guinness for a chance to break the record, she emailed every NFL team and gave each her application number. Six teams didn’t reply, but 14 teams, including the Bengals and Raiders, were generous, issuing her a press pass. If she had to buy a ticket to enter the game, she usually had to ask an usher to serve as a witness before and after the game to verify that she had stayed for the duration.

“It was a little overwhelming,” Barnhart said. “There’s a list of things you have to do to get the record, and when I was actually doing it, I was so paranoid I was going to forget something. I was freaking out. What if they found something that was wrong, or what if they didn’t think I was really there?”

After finishing her run on Dec. 7, she submitted all of her proof. Barnhart would either have to wait two months for the official verification from Guinness or she could pay $550 to expedite the process. Barnhart paid.

My 32 #NFL games in 86 days is officially a @GWR now! Woohoo it’s a #Festivus miracle (is that a thing?)!! pic.twitter.com/yXbKjMXOf6

“There was,” Barnhart said, “a lot of dancing and screaming in my room.”

Now that her trek is done and she’s officially joined the tallest man ever, heaviest twins, and the dude who runs fast while dressed as a waiter in that vaunted book of records, Barnhart is looking for her dream job as a sports travel writer (or as a travel sports writer, one supposes). For now, she works as a brand ambassador for Jim Beam and Hennessy while clocking in at two other jobs.

She’s also off Tinder for now. No time, no desire at the moment. After all, there’s more sports exploration in her future.

“I’m saving up for my next adventure,” Barnhart said. “Because next, I want to do the entire NHL.”