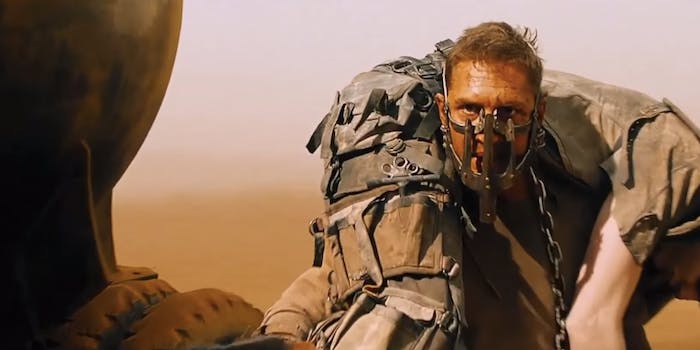 Everything you need to know about Mad Max before ‘Fury Road’

It’s been in development for ages, found a new leading man, and almost became a cartoon.

This week director George Miller unleashes Fury Road on the world, the first installment in his cult classic Mad Max franchise since Tina Turner vamped her way through Beyond Thunderdome back in 1985. It’s been in development for ages, and along the way it lost its leading man, found a new one, and almost became a cartoon before veering back to live action. To say that Fury Road is the end of a long road for Miller would be an understatement.

But with Fury Road arriving three full decades after its predecessor, there’s an entire generation of moviegoers for whom the name “Mad Max” might not mean a thing. Well, if you’re in that camp but you’ve been intrigued by Fury Road’s bonkers-epic trailers and the solid pre-release buzz, consider this your primer for everything you need to know about Mad Max before you see Fury Road.

Way back in 1979, director George Miller gave the world Mad Max, a dystopian action thriller set in a not-too-distant future when the highways of Australia are plagued by violent motorcycle gangs. A fresh-faced young Aussie actor named Mel Gibson starred as Max Rockatansky, a dedicated member of the Main Force Patrol—elite cops tasked with patrolling the roads of the Outback and taking down the heavily armed nutters who’ve turned them into their personal playground. Max is a natural badass behind the wheel of his MFP Pursuit Special, but after he brings a fiery end to the career of a criminal calling himself “Nightrider,” he finds himself marked for death by the dead crook’s cronies. Max eventually takes the baddies down… but not before they kill his wife and son.

Three years later, Max returned in The Road Warrior, but a lot had changed. Things had taken a turn for the post-apocalyptic in Max Rockatansky’s world, and the low-key dystopia of the original film was replaced by a blasted, post-nuclear hellscape of blistering desert and fetish-wear psychopaths obsessed with stockpiling “guzzoline” for their murder-mobiles. Max is now scavenging the wastes with only his dog and his supercharged V8 Interceptor for company. His loner ways are temporarily tossed aside when he is reluctantly roped into helping defend an oil refinery under siege by marauders led by the hockey-masked Lord Humungus. The Road Warrior amped up the car-related carnage even further than the original film, and it left Max battered and reminded that no good deed goes unpunished.

Miller’s Max series received arguably its most batshit-crazy installment in the form of 1985’s Mad Max Beyond Thunderdome. Set 20 years after the events of Mad Max, Beyond Thunderdome finds Gibson at his most grizzled and sporting Braveheart hair a full decade before he strapped on a kilt. Max’s talent for being in the wrong place at the wrong time reaches its apex after a crazed pilot steals all his belongings and he wanders into the prosaically named Bartertown. Before you know it, Max is caught in the middle of a power struggle involving a dwarf, Tina Turner in the role of Bartertown mistress Aunty Entity, and a whole lot of pig shit. (No, really. Bartertown is a methane refinery; you can work out where they get the methane.) Max narrowly escapes with his life, but soon enough he’s having to rescue a group of kids descended from the survivors of a crashed passenger plane, a task which puts him further at odds with Aunty Entity. Max once again saves the day and etches himself deeper into the legends of the post-apocalyptic wasteland.

Is Fury Road a sequel, reboot, or what?

Three decades after the release of Beyond Thunderdome, Fury Road has replaced original Max Mel Gibson—now aged 59—with the strapping Tom Hardy (The Dark Knight Rises). But new leading man aside, Fury Road definitely isn’t an outright reboot. Miller spent years trying to get a fourth Mad Max movie made, only to be plagued at every turn by financial difficulties, scheduling problems, and flat-out bad luck. At one point it was even going to be an animated film, but thankfully that iteration passed and the project eventually came together with Hardy, a bald Charlize Theron, and 120 minutes of balletic automotive insanity.

But in spite of 37-year-old Hardy being nearly a decade older than Gibson was the last time he played Max, Fury Road is neither unequivocally picking up where Thunderdome left off nor wiping the slate clean. As Hardy told Collider:

“It’s a relaunch and revisit to the world. An entire restructuring. That’s not to say that it’s not picking up or leaving off from the Mad Max you know already, but it’s a nice re-take on the entire world using the same character, depositing him in the same world but bringing him up to date by 30 years.”

In short: Don’t worry about it. If you’ve seen the previous three films, you’ll likely find familiar references and touchstones in Fury Road, but you won’t need to have seen them to enjoy the new flick. Don’t expect Marvel Cinematic Universe levels of continuity and consistency, but given that the series has always been about establishing Max as a mythic figure within the future history of the wastelands, giving him a new face actually works well from a thematic standpoint. Stories change with the telling and retelling, after all.

What’s Charlize Theron doing in the middle of all of this?

Max’s name may be on the poster, but Charlize Theron’s bald, badass Imperator Furiosa has been getting at least as much attention as the male hero in the lead-up to Fury Road’s release. Furiosa is the linchpin that sets Fury Road in motion, stealing five prize concubines from the personal harem of nutball Wasteland tyrant Immortan Joe (Hugh Keays-Byrne) and enlisting an in-even-worse-shape-than-normal Max to help get them to safety. Once again, the lingering vestiges of Max’s brutalized conscience compel him to help those in need, but this is very much the enigmatic Furiosa’s rodeo.

On the surface, Furiosa’s got everything you could want from a post-apocalyptic heroine worthy of standing shoulder-to-shoulder with Max Rockatansky: a severe haircut, a prosthetic arm, a thousand-yard-stare hiding years of trauma and bad road, and a combat-modded tanker truck dubbed the “war rig.” But if early reviews are to be believed, she’s got a lot more to her than your typical action heroine, so expect her to start turning up on lots of Internet lists alongside the likes of Alien’s Ellen Ripley and Terminator’s Sarah Connor. It’s worth noting that Max spends a good portion of the Fury Road trailers in chains or tied to things, so don’t go looking for a traditional “hero must rescue damsel in distress” arc from Max and Furiosa, nor any shoehorned romance subplots.

Another reason to love Furiosa, as if you needed more? She’s spun the skeevy “men’s rights” movement into a tsunami of butthurt indignation because she’s, in their words, reduced their beloved Mad Max franchise to “nothing more than feminist propaganda.” There there, lads: Max has survived this long; I’m pretty sure he can weather exposure to a strong female character. (Just don’t let the MRA types get wind of the fact that the planned Fury Road sequel was at one point going to be titled Mad Max: Furiosa.)

What’s with all the cars?

Cars, car chases, and automotive destruction have been at the core of the Mad Max series from the very beginning. Within the mythology of Max’s world, society began to crumble after a major energy crisis. Cars and fuel became vitally important as civilization faded, because they gave you mobility and power—the ability to fight, to flee from danger, and to scavenge among the scarce resources of the post-apocalyptic wastes. Beyond sheer pragmatism, automobiles began to take on fetishistic importance, with the wasteland’s violent psychopaths taking their obsession with cars and fuel to levels of near-religious fervor. In the future of Mad Max, you either hunker down as potential prey or take to the highways as predator.

The original Mad Max was basically just an extended excuse to smash cars and people into each other at high speeds, and that love of acrobatic, vehicle-related carnage has been dialed up to 11 in Fury Road. The latest Max flick is the natural culmination of the aesthetic Miller created in the first three films, designed to unfold essentially as one long car chase. And in a world where CGI is increasingly the go-to staple of action movies, Fury Road is keeping it old school with practical stunts, real explosions, and real cars—130 of them, to be precise. Safe to say most of them won’t make it to the end credits intact.

Whether you’re new to the world of Mad Max or a veteran fan with wasteland dust in your teeth, Fury Road looks to be truly must-see entertainment, the rare action movie that’s winning almost universal acclaim. If you’re interested, there’s still time to catch up on what came before: While Mad Max, The Road Warrior, and Beyond Thunderdome aren’t streaming on Netflix, they are available for rental and purchase from Amazon, iTunes, Google Play, and other services. Give ’em a watch before you strap in this weekend for one helluva ride.