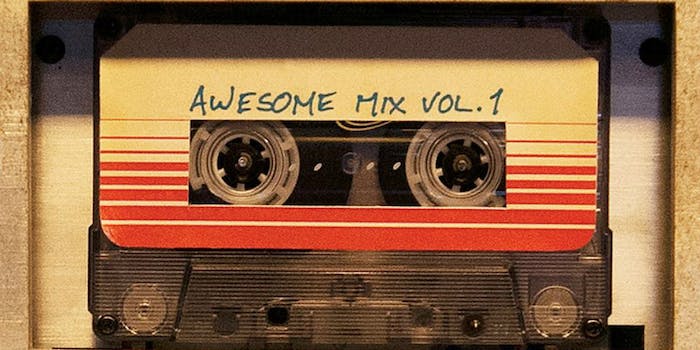 If you’ve had “Hooked On A Feeling” stuck in your head recently, it’s probably because of Guardians of the Galaxy.

GotG has already invited plenty of comparisons to Star Wars, but one of most significant differences is its soundtrack, which is almost entirely composed of 1960s and ‘70s pop tracks. This music choice was an unexpectedly brilliant decision, because it makes the GotG trailers way more memorable than they otherwise would have been. It’s not often that you see a sci-fi movie where the space travel scenes are backed by cheesy pop music.

As we explained in our guide to the Guardians of the Galaxy, the main human character in the movie is a guy named Peter Quill (Chris Pratt) who left Earth as a child. One of the few things he has to remind him of home is an old mixtape titled “Awesome Mix Vol. 1,” full of songs by artists like David Bowie, Blue Suede, and the Jackson 5.

Peter Quill’s childhood mixtape is being released as the movie’s soundtrack album later this month, but MTV has put together a Spotify playlist to tide you over until then.

Chris Pratt listened to nothing but this playlist the entire time he was filming GotG, so he’s probably heartily sick of all these songs by now. Many fans will take a leaf out of his book and listen to “Awesome Mix Vol. 1” on repeat from now until the movie comes out. But in a way this soundtrack album is almost a spoiler in itself. We suspect that it will sound way better after you’ve seen the movie, because then it won’t ruin any surprises.