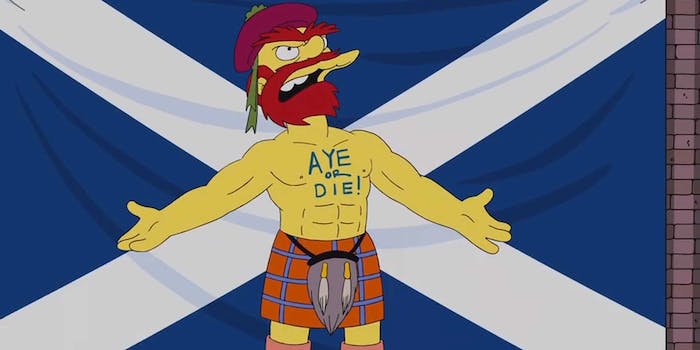 How does Groundskeeper Willie feel about Scottish independence?

As Scotland prepares to go to the polls next Thursday to determine whether or not the country will split off from the United Kingdom, everyone in the U.K. seems to have a strong opinion one way or the other.

Up until now, one important voice has been missing from that conversation: Groundskeeper Willie. Yes, The Simpsons’ long-suffering animated Scotsman has released a YouTube video weighing in on the vote.

“Both sides of this argument have valid points,” Willie explains, showing his willingness to be open to all opinions. ‟The heirs of the highland tradition, and those that enjoy crawling like worms beneath British boots.”

Willie clearly has feelings about which way his fellow Scots should vote. But, as an expat living in Springfield, Willie wouldn’t be allowed to vote on the referendum—even if he weren’t fictional.

Even so, Willie has some advice for what a newly independent Scotland should do if it finds itself looking for leadership.

‟Who, you ask, will lead the new, free Scotland on the world stage?” Willie inquires, presumably from the shed he lives in behind Springfield Elementary. ‟Alex Salmond, a champion of Scottish independence? A safe choice. But for a leader who stands in the grand tradition of William Wallace and Andy Murray, would you consider the return of Scotland’s prodigal son, Groundskeeper Willie?”