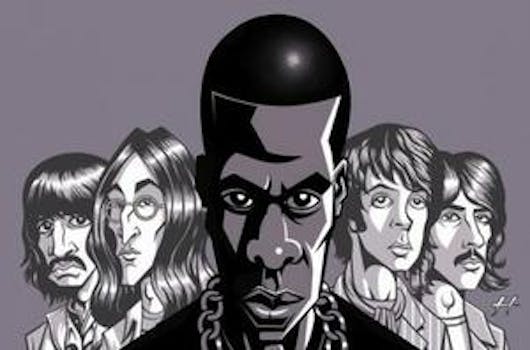 Upon its recent reissue, Danger Mouse's influential mashup of Jay-Z and the Beatles goes back under the lens.

That’s an awkward benchmark to examine the revolutionary mashup project, which layered Jay-Z’s vocals from The Black Album over warped highlights from the Beatles’ eponymous 1968 masterpiece that fans collectively branded The White Album. For starters, few pop culture moments this side of John Kerry’s fear of gay marriage make 2004 feel more dated than The Grey Album’s now also-ran cut and pasting.

The tale of Grey reads like the plot of a ‘90s hacker thriller where someone accidentally dials up a 56K connection and finds a code that could change everything: million-dollar company sues starving bedroom artist and makes him the most-wanted producer in America along the way. The issue actually bypassed the freshman interest-group debates about Napster and Metallica entirely, because Danger Mouse’s crime (real name: Brian Burton) was not initially Internet-based. He produced roughly 3,000 copies and peddled CD-Rs independently like a Memphis rapper, and then EMI (the major label that’s survived on the Fab Four’s catalog) brought in an army of Machiavellian lawyers to squash it.

It was this excess force that spun a classical freedom fighter firestorm about digital copyrights and fair use and statutory license. On Feb. 4, 2004, the now-defunct Worcester, Mass.-based Downhill Battle and nearly 200 sympathetic websites hosted the album for free on their servers for 24 hours to counter EMI’s efforts, and 100,000 people downloaded in civil disobedience.

Eight years later, apparently, The Grey Album endures as one of the most heralded, important, and influential albums of the 21st century. Thank well-earned martyrdom coupled with one pretty-cool-at-the-time idea.

By mashup standards, however, the album doesn’t hold up—and it barely did eight years ago. The Avalanches’ 2001 LP Since I Left You, for instance, packed 3500 samples into one coherent, hour-long work. 2ManyDJ’s 2003’s As Heard On Soulwax is similarly full of drag and drop showmanship and evokes dancing. Here, the “99 Problems” loops don’t even sync with the distinct cadences of “Helter Skelter.” The “Dear Prudence” riff that accompanies “December 4’s” verses is the only instance on The Grey Album where the mashup outduels the song its leeching.

Within the culture, it’s one giant unlistenable crime against hip-hop because it cheapened the creative spirit of a genre it was supposed to champion. The Black Album is the best album from the most prolific commercial rapper of all-time because of two key items: Jay-Z raps like a sultan and selects beats like a scholarly dork. Jay-Z’s most underrated talent as a musician has always been his curation of beats. The “Fade to Black” documentary about the creative process behind The Black Album shows him tirelessly skimming potential tracks without pretention or favors; 14 people wound up with producer credits, including nobody duo, The Buchanans. They’re still relative nobodies, but they gave us rap song for the ages, “What More Can I Say?”

To the former point, producers were so quick to pirate his ‘hood favorite vocals and remix them that Jay’s people released an acapella version of The Black Album specifically for bootleggers to flesh them out with their own beats. I had a buddy who spent most of a semester smoking weed and working on his own Black Album and the result was somewhat naïve in ambition but a great and worthwhile exercise in composition. Once the Grey Album made Pazz & Jop’s top 10, the game plan for producers changed.

The notion of juxtaposing pop music into mashups was nothing new eight years ago. That’s what’s made hip-hop such a fresh and interesting genre for four decades. But this was more direct and calculated. Peer-to-peer file-sharing by off the grid DJs helped spurn the practice while standardizing it: stack vocals over beats forged from cheeky origins not commonly found in the hip-hop genre. To make it work, one just needs to be a learned media guardian—urban kids who know suburban culture can gather and disseminate and live off their all-encompassing taste. (See the Radiohead/Jay-Z mashup, Jaydiohead.)

It should be noted that Danger Mouse, the producer, has shed his party crasher aesthetic and blossomed into a wonderful engineer, songwriter, and producer. His tight drumming on Beck’s Modern Guilt is virtuosic, human, and passionate. After the lawsuits his next two national projects—collaborating with eccentric masked rapper MF Doom on the hilarious and thumping Danger Doom LP and owning pop during the summer of 2006 by way of Gnarls Barkley’s “Crazy”—left Grey in the dust with an army of opportunistic mashups.

I’m just not sure why it’s back.