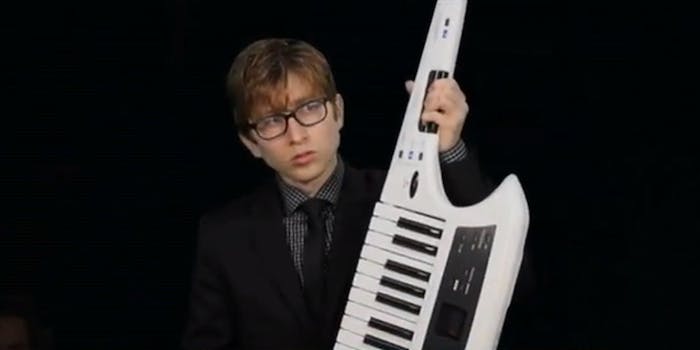 Returning to their roots, the crew behind Auto-Tune the News set Barack Obama and Mitt Romney's performances Thursday night to music.

Last month, the Gregory Brothers teamed up with the New York Times to songify President Barack Obama and Governor Mitt Romney’s acceptance speeches at their parties’ National Conventions. Now the three brothers (along with oldest brother Evan’s wife Sarah) are back to Auto-Tune the election season just in time for the first Presidential Debate.

PBS NewsHour host and debate moderator Jim Lehrer is notably absent as Michael Gregory, bespectacled and in a suit, takes his spot (armed with a keyboard guitar). As Romney and Obama dance to the beat to answer the moderator’s questions, he already has more control over the debate than Lehrer did Thursday night.

And that makes sense, because Michael got his big break on YouTube by Auto-Tuning the first Presidential debate of 2008.

Clocking in at just over two minutes, the Gregory Brothers’ version of the debate manages to fit in all of the debate’s highlights, zingers and awkward pauses. They even kept in Big Bird.

“We have very perverse incentives when it comes to the political process,” Evan Gregory told the Daily Dot in July. “We’re really rooting for those guys out there that aren’t necessarily the best policy makers but rather have the most hilarious voices. As it happens, great potential figures really do cross the partisan divide.”

While many are declaring that Romney won the first debate, there is no clear winner in this musical battle. But one thing is clear: “Debates are better as musicals.”