What can we learn about Greg Hardy from his toxic social media?

There seems to be a couple themes working on his Twitter page.

Greg Hardy can’t stay out of the news, and for the Dallas Cowboys defensive end, it’s for all the wrong reasons. He was convicted during a bench trial last year of assaulting his then-girlfriend in North Carolina, leading to a 10-game NFL suspension that was eventually reduced to four games. Last week, Deadspin released dozens of photos of the aftermath of the alleged assault. (His conviction was overturned on appeal and eventually expunged from the record.)

On top of that, Hardy recently released a misogynistic rap video, made weird comments about Tom Brady‘s wife, and slapped the clipboard out of the hands of a Cowboys coach before nearly getting into a physical altercation with him on the sidelines during a game.

And the Hardy news didn’t get any less vitriolic this week when he changed his Twitter bio to read “innocent until proven guilty,” and Deadspin released transcripts from a closed-door NFL meeting in which Hardy lays the blame of his physical altercation with his ex-girlfriend solely on her.

Dallas coach Jason Garrett talked to Hardy about re-tweaking his bio—at this point, this is about the only part of Hardy the Cowboys can and/or  have the desire to control—but a few different words don’t change Hardy’s presence on the social-media site.

Hardy is an NFL defensive star, in part because he’s strong and fearless on the field. But what makes him exceptional at football doesn’t make him a good Twitter follow (or, you know, a good guy in general). But we’re willing to do our own research, and we took a deep dive into Hardy’s Twitter habits to see how he handles himself online—and if we could learn something about him in the process.

Of course, sometimes he tells us exactly who he might be. 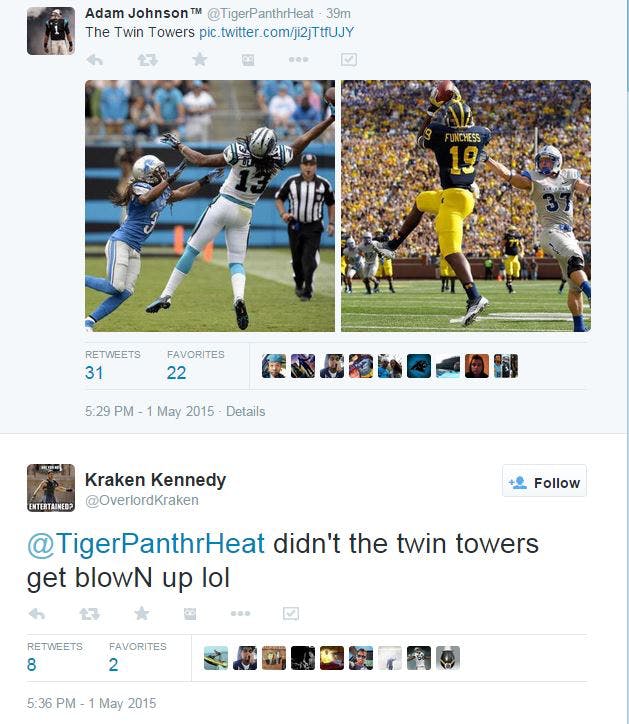 1) He appears to think of himself as some kind of superhero cartoon character, and he retweets everybody else who does as well.

His Twitter handle is @OverlordKraken, and the Kraken is the self-appointed nickname he’s given to his on-field persona—an NFL version of Dr. Jeckyll and Mr. Hyde. In an interview with KESN in March, former Carolina Panthers teammate Ben Hartsock said, “before the whole domestic violence thing came down on him, he was more of just kind of viewed as kind of a cartoon figure in our locker room… He refers to himself as the Kraken. I asked him one day about it… is this your character? How did this Kraken character come to be? He said some guy on Twitter gave him the nickname and he liked it, so he ran with it. It’s become one of these things where he’s almost losing touch with who Greg Hardy is at times. And the Kraken has taken over a little bit.”

And man oh man, the Kraken likes to use that RT button.

Not my style, but villains exist and they love their role. @OverlordKraken loves the role https://t.co/2z1KdNY5UP pic.twitter.com/86Lg34WOyJ

@OverlordKraken He cast a shadow over the world & filled oceans w/ QB's tears. He is known as the prince of darkness. pic.twitter.com/kePzIztJYG

@OverlordKraken my nephew wanted his face like yours for his bday all star game! #kraken #vegastakeover3 pic.twitter.com/5o0uk57D5c

At one point, Hardy even said goodbye on Twitter, perhaps so he could feel the love of his fans who never want to let him go.

The retirement from Twitter, by the way, lasted 12 days before he started retweeting again and painting himself as a superhero.

2) He keeps up his role as Mr. Hyde—a Mr. Hyde, mind you, who will apologize when he perceives he’s in trouble and guide you through this technological world.

These kinds of tweets, though, are rare.

That last tweet referenced that Twin Towers joke from above.

3) Some of his vaguer tweets hint that he maybe perceives himself as a wise man.

But upon closer look, you have to ask yourself—is he really just subtweeting somebody else?

Sum people say it's a privilege to play in the NFL and I don't understand…. My answer….

R U Not Entertained.. It's a priv. To b on my page and u will get blocked chump ole jabronis I respect MY Job and everyone else page try it

Thought of @DezBryant and @OverlordKraken when I saw this. Media can destroy great men's character. #LetGodJudge pic.twitter.com/qOTuu65FK2

@OverlordKraken f the media. Lets go get this ring, then get this money. #OGish

@inthemageors @1053SS @OverlordKraken and the media is so innocent? Greg Hardy isn't a Villain it's the media who trying to make him one

So, what have we learned here? Well, for one, we know that if fans think a star player can help their team win games, they’re going to support that player and dress up their kids as such, no matter the charges against him. And that might just play into Hardy’s persecution complex.

Which contrasts with something his former girlfriend told police after the alleged assault: “His pupils were tiny,” she said. “I mean, he looked crazy… His face, it was just blank… I’ve never seen him look at me like that.”

But the strangest part of this whole experiment might be the sense that Hardy thinks and is quite willing to reveal that he’s the real victim. Which might mean that the Kracken is flatly disinterested in changing his ways.

And they tripped about my legally owned gunes being n my place lmao…. And b4 u say anything sukaz… https://t.co/TK9VmHt3xY