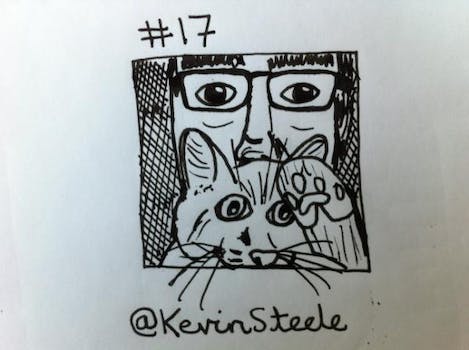 UK artist garners an instant online fanbase after pledging to draw his first 3,000 followers on Twitter. Now, we wait for the results.

English artist Greg Burney gained over 2,000 Twitter followers in under 12 hours last week. It’s the kind of rapid popularity over which social media marketers would salivate.

All it took was a promise: follow him by Nov. 14, and he’ll draw a sketch of you.

Burney started the project, which he calls #drawmyfollowers on Oct. 31. “I’m really interested in connecting with people in personal ways across the Internet,” he told the site GeniusRocket last week.

People love to be drawn, he added, and “Twitter is the best place for these small connections.”

At the time, Burney only had about 80 followers. A week later, he’s already topped 5,000. The project has become so popular, in fact, that he’s already had to backtrack. He’s no longer sketching everyone who follows him—just the first 3,000.

“If the project continues to snowball at this rate, I will end up with tens of thousands of followers by the November 14 cut-off point,” Burney wrote on his Tumblr page. “By the time I complete these, I will either have a ruined hand, or a long list of bored people waiting months for a tiny image that they are no longer excited about!”

But Burney, a university student, also runs Dashing Industries, a clothing company that he links to directly from his Twitter page.

When he finishes his sketches, he’ll have at least 5,000 new potential customers. He’s already started promoted his company in his tweets. But we’re not pointing that out to criticize him.

There are many ways to promote a new, small company on Twitter. Burney may have just found the most effective—and most fun.