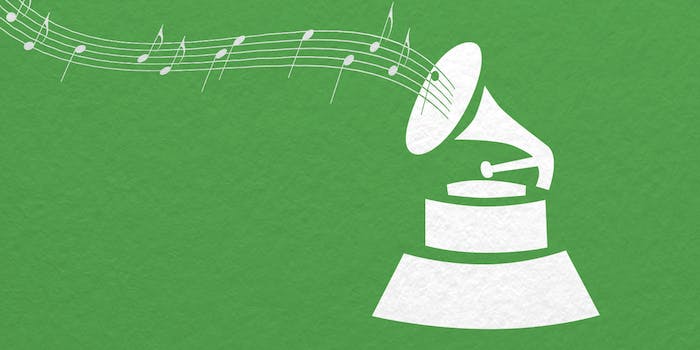 Chance has a chance.

The Grammys are finally catching up with the times: Today the Recording Academy announced it will consider streaming releases for the 2017 awards show.

This change drills down to language, which now takes into account “paid subscription, full catalogue, on-demand streaming/limited download platforms that have existed as such within the United States for at least one full year as of the submission deadline.” This includes platforms like Tidal, Apple Music, and Spotify, but YouTube-only releases are still not eligible. Recording Academy Senior VP of Awards Bill Freimuth told Billboard:

We think that [language] is actually a key to making this work for us and should really accomplish that goal of making sure that the artists who, I guess primarily for philosophical reasons, are releasing through streaming only, that they’re eligible while excluding still most, if not all, the amateur recordings.

This year saw more of a spotlight on artists and their “philosophical reasons.” One of the most high-profile cases was Kanye West‘s publicly edited The Life of Pablo, which climbed to No. 1 on the Billboard 200 chart in April, based almost exclusively on streaming. Though, as Billboard points out, it’s not clear which “version” of TLOP might be considered. Last month, Chance the Rapper’s streaming-only Coloring Book hit the Billboard top 10. In May, a petition started circulating asking the Academy to consider free music in the nomination process, with a focus on Chance.

National Academy of Recording Arts and Sciences : Allow free music to be eligible for Grammy nominati… https://t.co/qgcVIgzFLw via @Change

This new language could have the most impact on rap and hip-hop releases, though releases on mixtape sites or SoundCloud are apparently not eligible. On a related note, Best Rap/Sung Collaboration has been renamed Best Rap/Sung Performance “to represent the current state and future trajectory of rap by expanding the category beyond collaborations between rappers and vocalists to include recordings by a solo artist who blurs the lines between rapping and singing.”