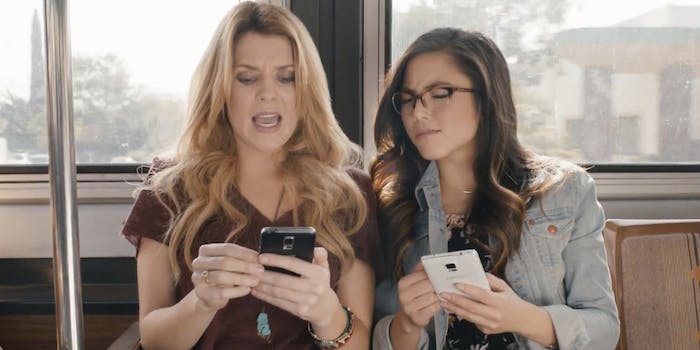 Grace Helbig, King Bach and other big names are swiping left on smokers.

Pentatonix weren’t the only YouTubers to get some Grammys screen time on Sunday. Several prominent web video stars lent their voices to an anti-smoking commercial that aired during the awards show.

Truth, the nation’s largest youth non-smoking organization, used the Grammys to promote its new #leftswipedat campaign, which plays on the Tinder-centric swipe mechanics of online dating to encourage kids to say no to smokers.

Grace Helbig, Anna Akana, King Bach, and Harley Morenstein were among the digital talent who participated in truth’s anti-smoking PSA, along with teen favorites like Becky G and Fifth Harmony. In the video, each time a picture of a smoker appears in a dating app, the gang decides to “left swipe dat,” no matter how attractive the smoker might be.

Moving the ad from digital distribution to the Grammys was a calculated move to increase teen awareness, according to Robin Koval, chief executive officer and president of Legacy, which funds truth.

“It’s very hard to aggregate live audiences of young people, the moments when you can do that are far and few between, so we want to take advantage of them,” she told CNN. “We know that youth will be watching.”

Many of the digital stars that truth recruited to capture young eyeballs are crossover stars as well. Morenstein’s Epic Meal Time franchise is now a television show, Helbig is set to premiere an E! talk show this season, and King Bach is on TV shows like MTV2’s Wild ‘n Out and The Mindy Project.  Their fans have been listening and tagging #leftswipedat on social media in response—exactly what Truth was hoping for.

That #LeftSwipeDat commercial was one thousand times more entertaining than Kanye's performance.

#LeftSwipeDat is the best performance all night…