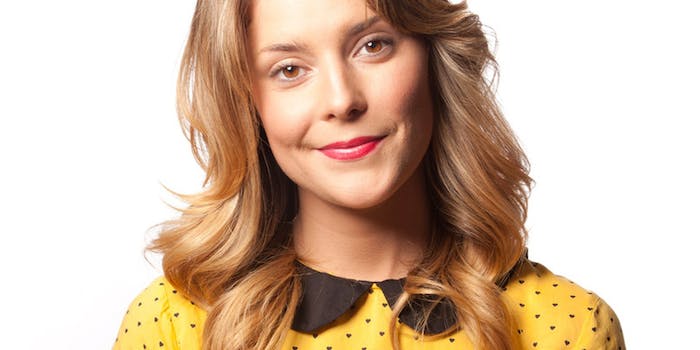 Shooting the sh*t with Grace Helbig

How the My Damn Channel sweetheart became an awkward older sister and role model for YouTubers.

“I’m all about shits and giggles,” blurts Grace Helbig, the affable My Damn Channel host.

In fact, in over the course of a 13-minute conversation, the 26-year-old comedian references “shit,” “poop,” or “fecal matter” nearly 10 times.

She’s talking about her show, the every-day-of-the-work-week vlog Daily Grace, wherein the Brooklyn-via-New Jersey comedian riffs on dry gin and shows you how to make meat cupcakes. But she’s also talking about her day. In fact, the subject of stool—and her ability to avoid it—has played a major role the course of how she’s met the morning.

“I got on the subway and noticed all these people at every stop would run into our car at the last minute,” she recalls. “I looked in the car next to us, and there was a homeless man with a variety of carry-on luggage that I assumed all smelled like fecal matter. I felt like the odds were in my favor.

“That’s how you know it’s going to be a good day. As soon as you avoid the shitty homeless person, everything’s coming up you.”

Helbig has been speaking publicly about poop since she graduated from college in the spring of 2007. Posting YouTube videos from her housesitting pad with her friend Michelle Vargas, Helbig amassed a quick following and drew the attention of My Damn Channel CEO Rob Barnett, who offered her a slot on the newly developed network when she 21 years old. The invitation manifested itself in the form of Bedtime Stories, a show in which Helbig would reinterpret well-known fairy tales with an R-rated, NSFW twist.

Her voice—a whimsical, meandering tone that’s hilarious, excitable, and knowingly naïve—developed through that, and by 2008, she’d moved on to a more personally driven format that would eventually come to be known as Daily Grace.

Helbig’s daily content on Daily Grace is exactly that: Helbig’s. Thanks to a long, progressive relationship with My Damn Channel, Helbig is the recipient of “the wonderful gift of creative freedom.” She can talk about whatever she wants, whenever she wants, however she wants.

“I obviously try to avoid racism, because that’s one thing that I should not be putting on to the Internet,” she quips. “And every once in a blue moon, we’ll have a project to promote or a Web series to share, and I like to pat the shoulders of my fellow My Damn Channel Family members. But 95 percent of the time, it’s me sitting at home in my apartment thinking about things that are goofy.”

That includes: annoying public displays of affection, sibling rivalries, the Teen Choice Fashion Awards, pregnancy, the hilarity of dick pics, the banality of laundry, the ridiculousness of shopping for wedding dresses, and Justin Bieber’s “As Long As You Love Me.”

Helbig says that she gets most of her topics through fan suggestions on her Facebook, Tumblr, and Twitter feeds. “It’s a great way for the blog to feel more interactive, and for my audience to think that they’re creating this beast along with me,” she adds.

“The Internet is a very intimate entertainment experience. I’m in my own apartment talking to people, and I want them to feel like they’re with me in my apartment. So if I’m listening to them and taking ideas from them and being honest with how I’m feeling, it resonates even more that we’re having a real, actual conversation.”

No YouTube vlogger ever bats a thousand, but Helbig seems to be even more comfortable dropping a dud or reveling in the truth that, on the Internet, “things are either epic, or they’re epic fails, and there’s nothing in between.”

“I think if you ask people why they watch me, there would be some common thread among all of them that I’m somewhat of an awkward older sister,” she posits. “I have a teen, mostly female demographic. How that happened, I don’t know. But I think they see me as some sort of bizarre role model, and I’ll keep trying to do that for them.

“I want to make videos that, if I didn’t know myself, I’d want to watch. As long as I’m making myself laugh, I’m usually having a good time. That’s how I know I’ve made a video that I’m proud of: I’ve made myself laugh.”

That laughter’s often spawned from spontaneity. Vloggers tend to have their own unique methods of scripting and shooting, and Helbig’s is decidedly disorganized. She hardly ever writes out material—she’ll script something “maybe once in every 50 videos”—and rarely even knows what she’s going to vlog about until a few hours before she shoots.

“It’s literally just me gathering an idea from the Internet, turning my camera on, and then quacking for 15 minutes or until it says my memory card is full,” she says. “I bop around and say and do whatever I want, and that’s how you get those really authentic moments of discovery. It’s what people enjoy: It feels homemade, and it feels real. But that’s mostly because that’s what it actually is: it is homemade, and it is real.

“It’s a system I’ve found is best for me, and it’s most rewarding for myself and the people that are watching. When I’ve done somewhat scripted stuff, it feels a little flat. It feels like there’s not much life behind it. I try to be as real as possible. If I have to take a shit in the middle of filming, I let them know.

Indeed, Grace Helbig is in it for the shits and the giggles.