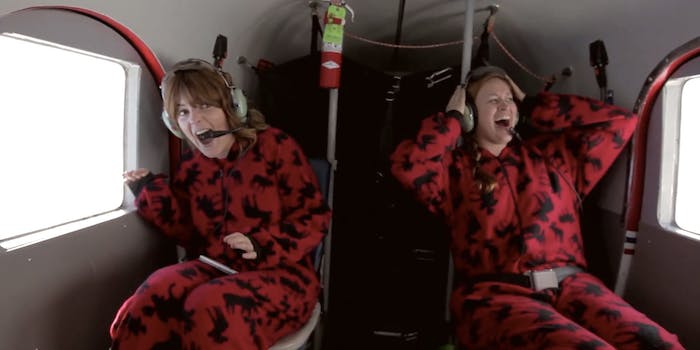 The fan-spurred country-wide road trip kicks off in Alaska.

What do YouTube darlings Grace Helbig and Mamrie Hart do immediately upon landing on an Alaskan glacier in their new travel series, #HeyUSA? Drink vodka shots made with glacial snow, of course.

So frames the first mini-episode of the series that follows the two Camp Takota stars on a country-wide road trip suggested by the YouTube community. Over the course of the eight-week series, the women will visit various locations as directed by their fans and will showcase in the first half shortform “near real time” posts, followed by more overarching, longer episodes later in the process.

The first dispatch highlights user suggestions, which pop-up alongside the women, to go to a glacier. So Helbig and Hart don matching winter onesies, hop on a “tiny ass scary plane” otherwise known as an air taxi, and promptly warn, “We might sh*t ourselves on the plane!” We watch them clutch each other and freak out as they navigate their way to the glacier, and promptly upon landing, there’s a mini avalanche to sustain their fears. Then it’s time for twerking, snowfights, and the vodka, before it’s back on the tiny plane to safer ground. A few seconds of trivia remind us that it’s a travel show and we might learn something, but mostly we are here to watch Hart mic-drop the vodka bottle into the slow and to watch the pair fall down while marching back to the plane. The teaser reveals there’ll be snow sledding the next go-around.

Fans can find #HeyUSA on the YouTube channel Astronauts Wanted, a transmedia youth content brand, instead of the women’s own channels. The series was created by Billy Parks and Nick Shore, who are executive producing with Ken Treusch of Bleecker Street Entertainment.  Videos are updated three times a week (Tuesday, Wednesday and Thursday) while the stars continue to update their own YouTube presences.

So far, this is a road trip we want to tag along on.