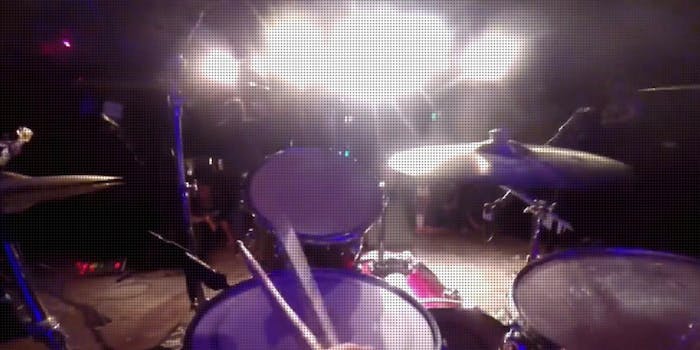 The GoPro: It’s been in a dishwasher and a crocodile’s mouth. Now, it’s ended up in the next logical place: upon the head of the drummer of a hardcore band.

Converge’s Ben Koller recently strapped on a GoPro during a festival in Seattle, to document what it’s like behind a drum kit. In the video’s description, it’s called a “chesty cam,” so perhaps it was strapped to him like a lie detector, rather than a head-mounted approach. The band performed two songs, “Dark Horse” and “Concubine,” and Koller’s hair whipping back and forth in the frame gives some added out-of-body perspective.

This isn’t the first time the “Koller Cam” has been thrown into battle. He seems to be a proponent of the first-person drumming movement.

One commenter summed it up nicely: “I would binge watch 3 seasons of this if it were on Netflix.”