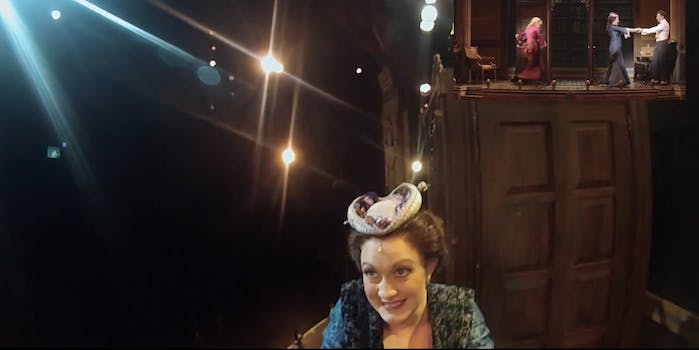 The bright lights of Broadway are even brighter from the actor's POV.

A Tony Award-winning production just gave fans an extremely behind the scenes look with the help of a GoPro.

Bryce Pinkham, the lead in A Gentleman’s Guide to Love and Murder, strapped a camera to his head during a rehearsal to show viewers what it’s really like to perform on a Broadway stage

The clip combines what Pinkham sees as he sings the rousing—and logistically complicated—”I’ve Decided to Marry You,” and then included a clip of what the scene looks like from the audience’s perspective.

Besides definitely being unable to see a single person in the audience thanks to those lights, this particular sequence is dizzying. It’s a wonder Pinkham can keep his head on straight, GoPro or no-pro.

Screengrab via A Gentleman’s Guide to Love and Murder/YouTube