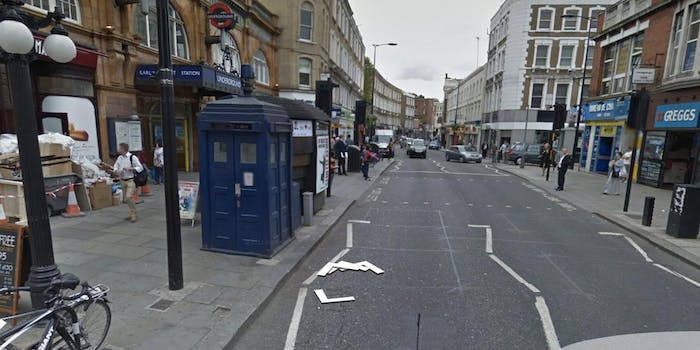 Google Street View lets you take a peek inside the TARDIS

If you’re a Doctor Who fan living in the U.K., you’re probably used to seeing TARDISes all over the place. Or as they’re known in real life, Police Telephone Boxes.

However, there’s one particular Police Telephone Box that stands out from the rest—at least, according to Google Street View. If you happen to be wandering around outside Earl’s Court Underground station in London, you’ll come across that familiar old blue box, sandwiched between an ad for Billy Elliot and a few blurred-out pedestrians. But if you click on it, instead of just scrolling through to another section of street, you end up inside the TARDIS.

Now, you can’t do a great deal of exploring, probably because even Google doesn’t have the capacity to map the near-infinite insides of the TARDIS. But you can take a stroll around the main console room, which looks something like this:

A far more appealing prospect than the TARDIS we see in Earl’s Court Road, which is very obviously smaller (and drearier) on the outside.

For their next trick, we’re hoping Google will go for Platform 9 3/4 at King’s Cross Station.