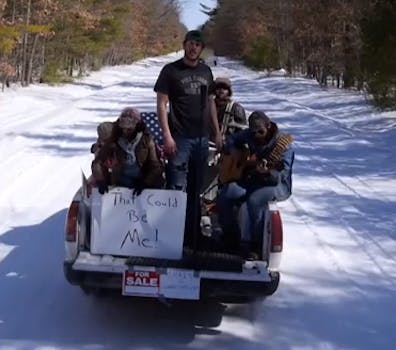 Gunnar & the Grizzly Boys say it's real, but a number of viewers are claiming false advertising.

Gunnar & the Grizzly Boys may be the first folks to create art out of a Google Street View taping.

Unless they’re lying to you. In which case they’d be just another band in the back of a pickup truck.

The Grand Rapids, Mich., sextet, an outlaw country outfit that likes “Fishing, Hunting” and “Ridin’ in the Hillbilly Hummer and the Hummer Deluxe,” just dropped a new music video for their Nashville name-dropping anthem “Could Be Me.” In it, the band reportedly puts a friends’ access to a Google Street View car to good use.

The video tracks the Grizzly Boys and a big group of their friends as they cruise down a snowy road in Michigan on the backs of three pickup trucks. Rather than appearing in standard video form, the camera’s focus fades in and out, as if someone’s pushing the forward arrow on a Google Street View map.

Gunnar & the Grizzly Boys say it’s real—”To protect our friends at Google who bent the rules to make this video possible (and their jobs), we can’t disclose when and where this was filmed,” they wrote on the video’s page—but a number of viewers are claiming false advertising.

“Just a camera car and clever editing,” one YouTuber wrote. “Not a Google car.”

“Google blurs faces, so it’s fake, but entertaining,” added another.

Update: Gunnar responded to the Daily Dot, “I think it would look a lot cooler if it wasn’t shot by an actual Google car.”