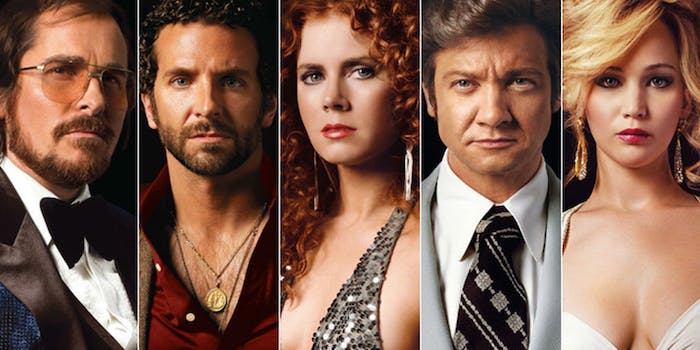 This is who the Internet thinks should win the Golden Globes

I looked at Google Trends and Twitter analytics service Topsy to see who the frontrunners are for the 71st annual Golden Globes.

The 71st annual Golden Globes air this Sunday at 8pm EST. The thing everyone wants to know (besides how precisely Jennifer Lawrence and returning co-hosts Tina Fey and Amy Poehler will continue to charm her way into our hearts) is who is going to win. Will Breaking Bad finally pick up a Best Drama-TV Globe for its last season? Which Christmas-release period piece about greed will triumph for Best Comedy or Musical-Film, American Hustle or The Wolf of Wall Street?

I looked at Google Trends and Twitter analytics service Topsy to see who the frontrunners are, according to the Internet hype machine. 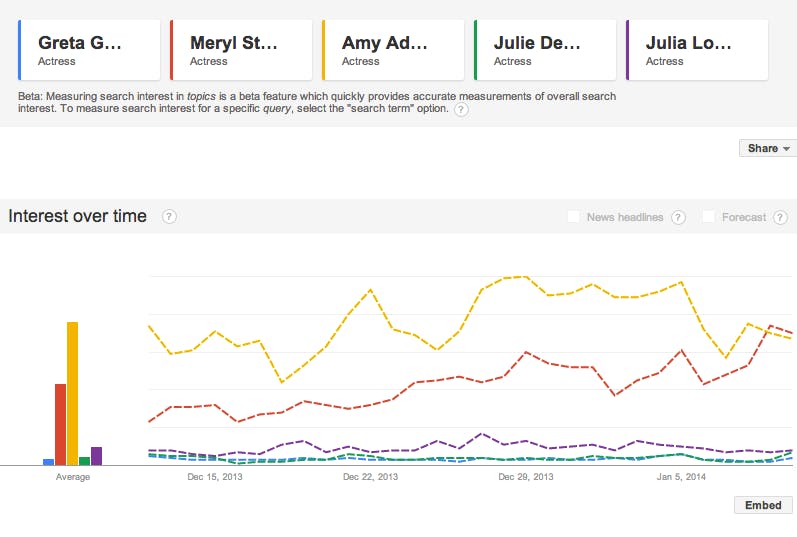 Sandra Bullock is by far the most searched-for actress on this list, and considering Kate Winslet is in second and the movie she’s nominated for, Labor Day, isn’t getting very good reviews, it looks like Sandra will win handily (even though the dialogue in Gravity was extractable.) 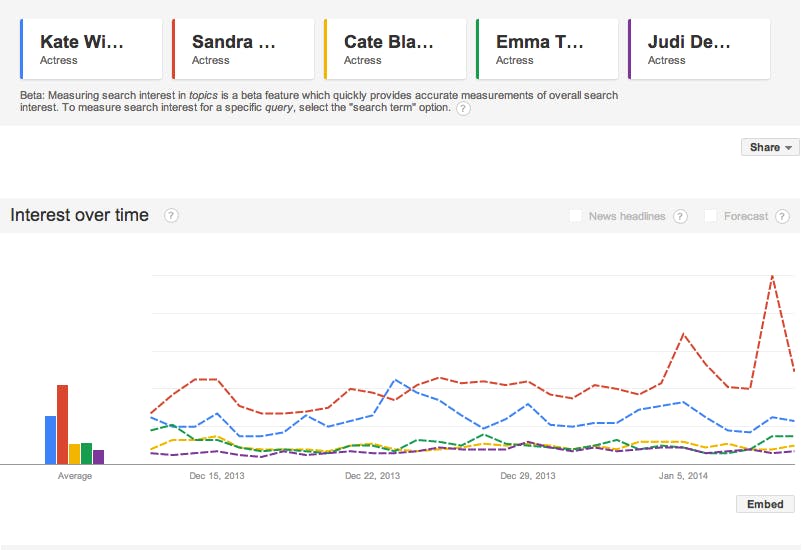 Leo is way out front on this one, with Christian Bale in second. Google Trends tells me that, at one point, Bale and Joaquin Phoenix were searched for almost the exact same amount, and a lot more than Leo, back in 2009 (when Joaquin was pretending to be a crazy person and The Dark Knight was the thing). Google apparently liked the controversy-courting Phoenix better. And Twitter is all about DiCaprio over the past month. 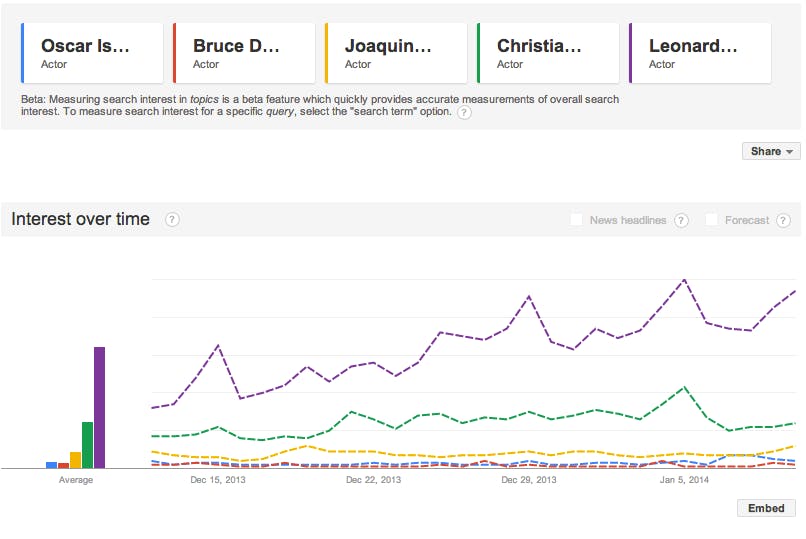 Woah, Tom Hanks is ridiculously popular. He beats everyone by a county mile. That’s too bad, because he’s far from the most deserving actor on this list for the award this year. 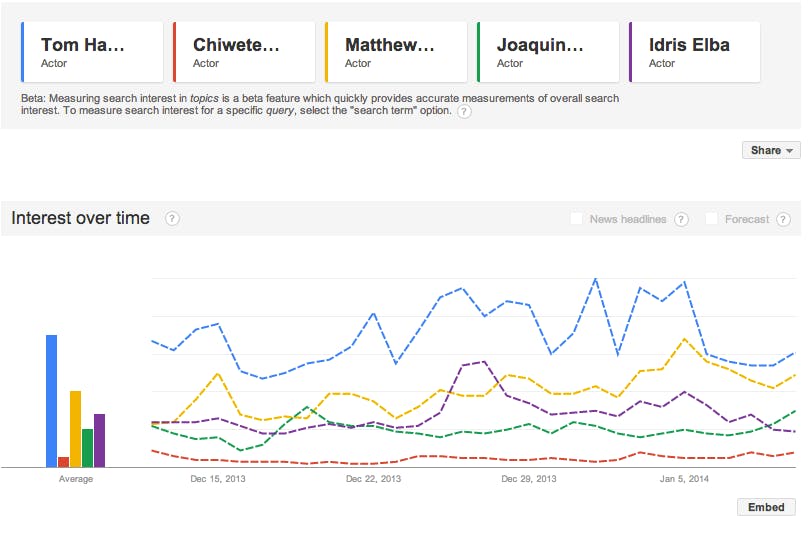 McQueen dominates this section, although Alfonso Cuaron makes a good showing on Twitter and David O. Russell holds his own on Google Trends. I’m honestly a little surprised at Russell’s lack of Twitter gravitas, considering how legendarily weird his film sets are. 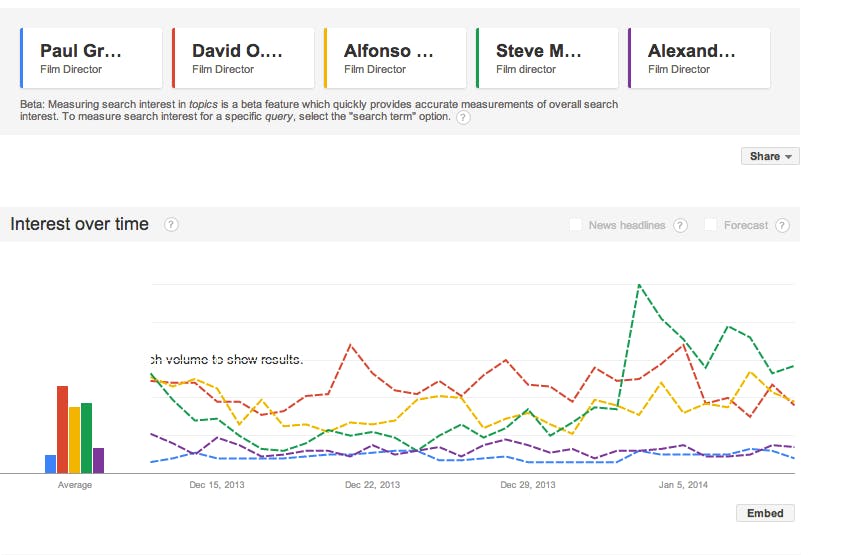 People really digThe Big Bang Theory. It’s leagues ahead of everything else on Google Trends. Even on Twitter, the wholesome sitcom about big old nerds is beating HBO’s much-blogged-about Girls. 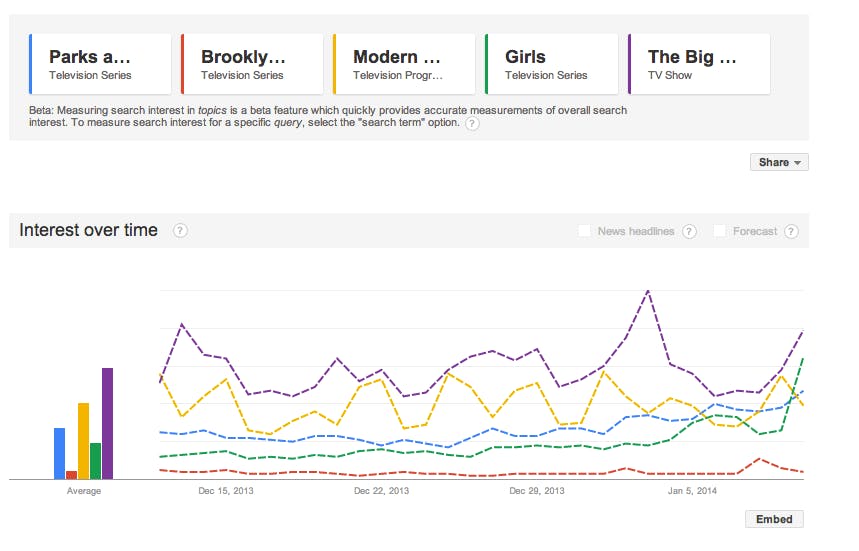 Breaking Bad may have never won a Golden Globe, but it’s way ahead of its competitors when it comes to Internet buzz. Even though it’s been off the air for months, people are still talking about Breaking Bad on Twitter more than Downton Abbey, although the period drama about rich Brits briefly eclipsed the meth masterpiece a few weeks ago, around its season premiere. 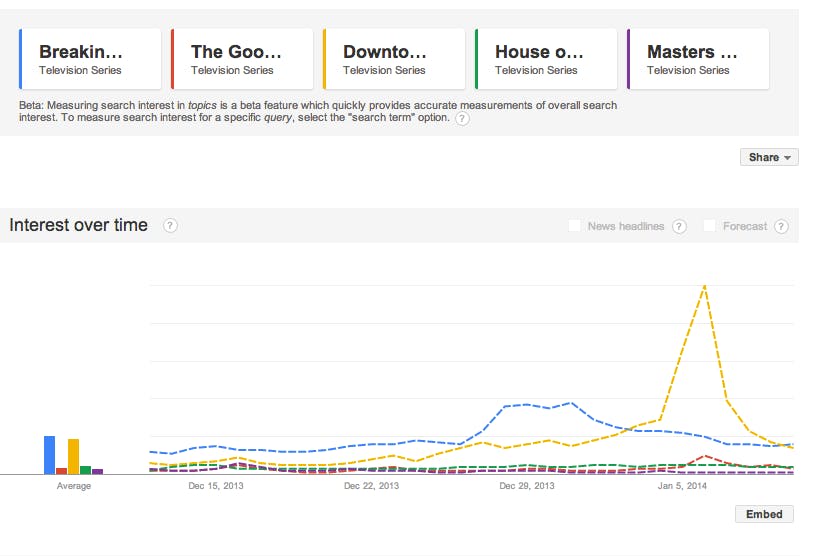 Gravity’s buzziest period is over, but it’s still attracting more interest than the other contenders. 12 Years a Slave makes a good showing (and IMO is a much better movie).

Comparing 12 Years a Slave and Gravity on Topsy, Gravity comes out on top again. 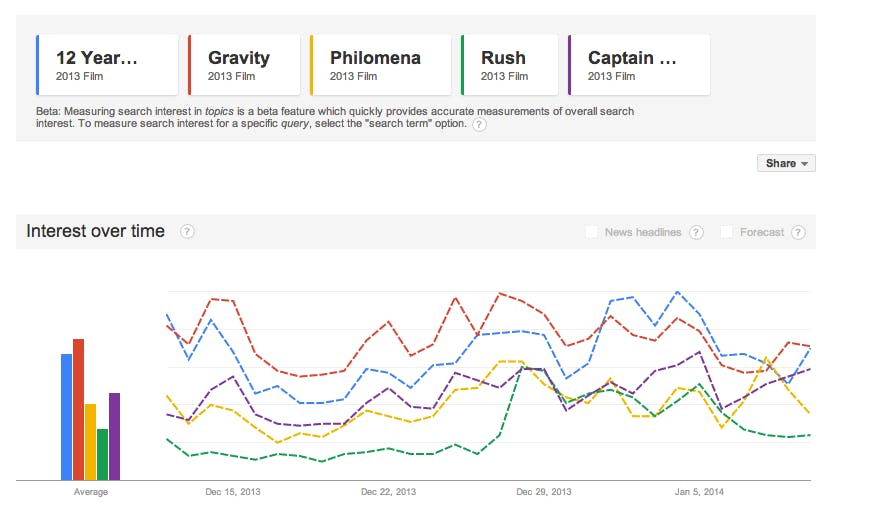 The Wolf of Wall Street

The Wolf of Wall Street takes this category, with American Hustle in second and everything else left trailing these two tales of American greed, according to Google Trends. Topsy shows a closer race with Her, as it has eclipsed American Hustle in Twitter buzz over the past week. It should be a close one. 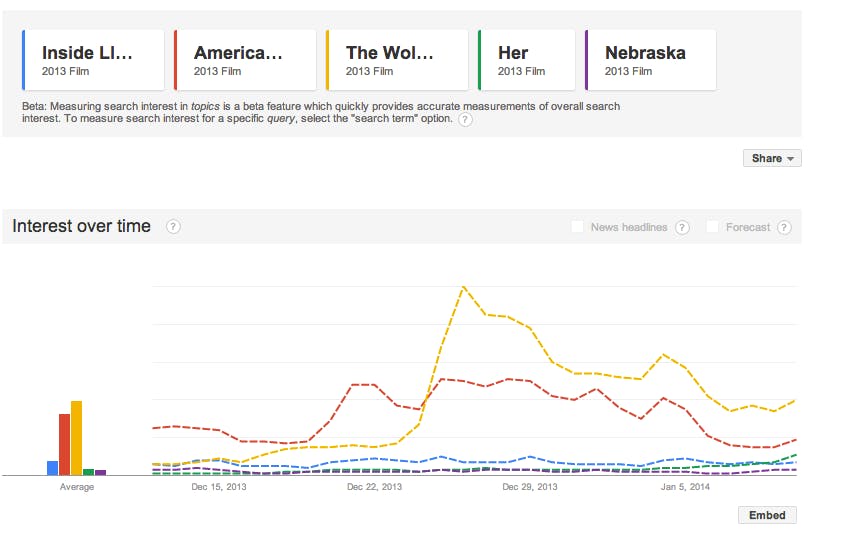 So what can we learn from asking Google and Twitter? First of all, Google popularity doesn’t necessarily equal critical acclaim. Tom Hanks is an American treasure, sure, but does anyone think his performance topped Chiwetel Ejiofor’s star-maker turn in 12 Years a Slave?

No one. Well, maybe a few people at the academy.

Google Trends is ultimately not the best way to predict the Globe winners but… it’s not the worst way. Coupled with the insights from Twitter, I’d say about half of these will turn out correct, which isn’t a terrible average. I suppose we’ll have to wait until the awards to know for sure.